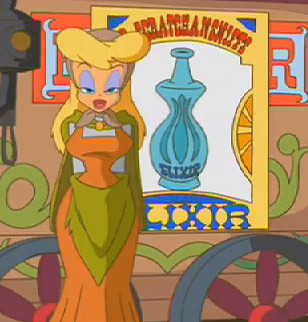 This is based on the "hourglass figure" beauty ideal, where a woman is considered attractive if she has big breasts, a narrow waist, and wide hips. A narrow waist not only implies physical fitness, but also makes the breasts look bigger and the hips look wider by comparison. The attainability of these proportions in real life depends a lot on personal genetics, but the medium of drawing allows an exaggerated archetype to be portrayed without the restraints of biology. A woman with an IHF is always designed to be attractive, even in the cases where she's not Ms. Fanservice or a Head-Turning Beauty: Monsters with insect-like narrow waists do not count, even if the shape reminds one of an hourglass.

For the garment which allows people who aren’t blessed with a natural IHF to mold their bodies closer to the ideal, see Of Corsets Sexy and Of Corset Hurts. Male-to-female crossdressers, Transgender girls, or even cisgender girls who just feel too thin can also use Fake Boobs, and/or similar padding about the hips to help with this. Other tropes involve some of the same attributes, but go for a different result. Noodle People don’t just have thin waists, but their entire torsos as well as their limbs are elongated and thin. Hartman Hips is the term for when a narrow waist and wide hips are used to represent adult womanhood, but the bust is de-emphasized to avoid sexual connotations. Contrast Pettanko (which is what most Hollywood Thin women are without the help of padded bras or implants; the female breast is largely fat when not nursing). When other characters notice, they might say that she has Curves in All the Right Places.