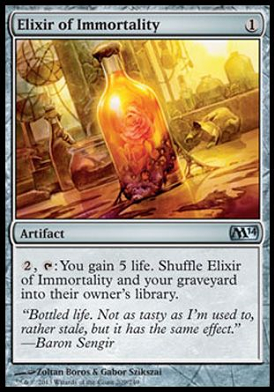 Peter Quill: Well, you may not be mortal, but me...
Ego: No, Peter... death will remain a stranger to both of us, as long as the light burns within the planet.
— Guardians of the Galaxy Vol. 2
Advertisement:

This trope happens cases where a character is immortal through the agency of a physical object or substance or of some kind of ritual. How the object works can be very varied. It may be Powered by a Forsaken Child, thus invoking Immortality Immorality, or it could be powered by harmless Technobabble. In either form, it often takes the form of an Elixir of Life.

The extent to which it works and what kind of immortality it bestows also varies. It might only work on a single character, or it could work on anyone in the vicinity. It may also have negative side effects, especially if it's a prototype or created by a Mad Scientist. Said object will often be an Amulet of Dependency: they will typically lose that immortality if the object is destroyed or sometimes just if they lose contact with the object, often resulting in No Immortal Inertia.

In some cases, characters may try to merge with this item in order to gain its effects permanently. This may work, or it might backfire horribly, depending on the story and what the object is.

Likely to be a MacGuffin or Plot Coupon. If the Immortality Inducer can be mass-produced, it may lead to a Society of Immortals.

Contrast Artifact of Death. The opposite of this trope is Immortal Breaker.