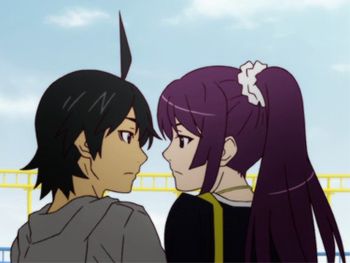 No points for guessing what's going through his head.
"What the hell is going on with that hair? Everything else about him is fine, but that single strand of his hair is defying all laws of gravity. You could tie him to the end of a rope and use him to catch fish."
— ProJared on Brian, "Quest 64"

Ahogenote  Not to be confused with Eroge, or Ahegao, a similarly risqué concept. (literally idiot hair) refers to the noticeable slim forelock of hair that sticks straight up from a character's head. Originally a hairdresser term for the "stupid hairs" or cowlicks that will not comb down, it later mutated into a reflection of a person's intelligence. Thus Idiot Hair suggests that a character is stupid, naïve, or strange. (This suggestion is usually accurate, but not always—sometimes a serious character just has funny hair.)

Even if a character is not specifically stupid, naïve, or particularly odd, the ahoge also usually represents a general mischievous quality about them in general. Goes hand in hand with the Cat Smile. It can also be used to show that Something Else Also Rises.

Idiot Hair is not to be confused with the two-stranded antennae-style hair, popularized by Love Hina or Ah! My Goddess. It isn't about idiot heirs, either.

Can be Truth in Television, as people with cowlicks