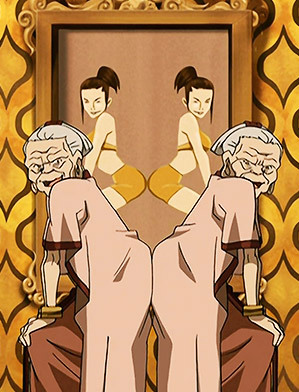 You all know them. That kindly old lady who lives down the street. The tiny, wrinkly, owner of the local dojo. The aged, fading seductress. The crotchety old guy who hardly ever leaves his house. Wrinkled, aged, musty... but they weren't always that way.

Once upon a time they were attractive, very attractive. This will be revealed to the rest of the cast if they ever run into a Fountain of Youth, or via old photographs or perhaps just to us the viewers in a Flashback. Bonus points if this is true for the actor as well, such as Diana Rigg, who played Cool Old Lady Olenna Tyrell on Game of Thrones but was also a sex symbol in the '60s due to her Femme Fatale roles.

Compare Glory Days, The Chains of Commanding (for those who lose their looks due to stressful jobs), and White-Dwarf Starlet (for old ladies who were performers in their youth). Contrast She Is All Grown Up; Silver Fox; Really 700 Years Old; and I Was Quite a Fashion Victim.

Related to I Just Want to Be Beautiful for when the character misses their old beauty, and Old People Are Nonsexual when it's implied that they stopped getting around when they got older and less hot.

Not to be confused with the Pokémon Platinum character.

Granny told Daffy that the pretty lady in the portrait is actually her in her youth. <br>she also claims to be a spy as well, much to Daffy's surprise.

Alternative Title(s): I Was Quite The Looker

Granny told Daffy that the pretty lady in the portrait is actually her in her youth. <br>she also claims to be a spy as well, much to Daffy's surprise.