I Need to Go Iron My Dog
aka: I Have To Wash My Hair 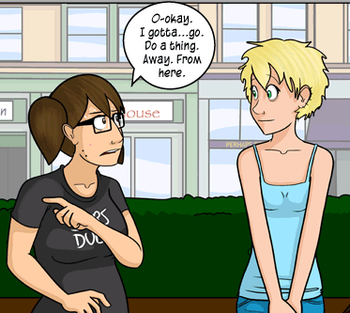 Goes hand in hand with Screw This, I'm Outta Here!, of course. Privacy by Distraction is the inverse of this, where the character says something intended to make the hearer leave the room so they talk about something private to another party. When a character is forced to leave the room due to an event or plot point, it's Deus ex 'Scuse Me. Can be used to Leave the Two Lovebirds Alone. Compare Not Even Bothering with an Excuse, which subversions of this trope often lead into, and A Dog Ate My Homework, another poor excuse... for not doing homework. Stepping Out for a Quick Cup of Coffee applies if the character's real reason for leaving is to let the others do something he's not supposed to participate in or know about. Some instances of this trope can result from Thinks of Something Smart, Says Something Stupid.

Not to be confused with My Hovercraft Is Full of Eels, Microwave the Dog, or Kick the Dog. Compare with I Have This Friend, a similarly flimsy hypothetical rather thin excuse. Contrast with Suspiciously Specific Denial. A string of these becomes a Hurricane of Excuses. A Sub-Trope of Looking Busy.

My Digital Clock Is Broken

Goofy reminds Mickey that he owes him a favor with a flashback to the toon's old inkblot animation.

My Digital Clock Is Broken

Goofy reminds Mickey that he owes him a favor with a flashback to the toon's old inkblot animation.