Hypnotize the Captive
aka: Hypnotize The Princess 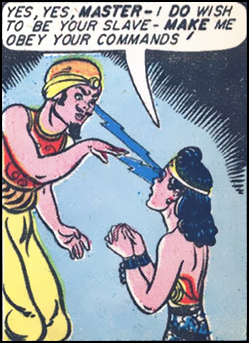 "30. I will refuse all gifts from the Evil Overlord. They probably contain mind control devices that would make me giddily happy to marry him. It's demeaning enough to be head-over-heels for the Hero, let alone a creep like the EO."
— The Universal Genre Savvy Guide, The True Love List

The Damsel in Distress or Distressed Dude is in the clutches of the villain, but the villain decides that chains, cages, cells, and other ways of containment are too unreliable. The hardest chain for The Hero to break while freeing this prisoner is in the damsel's own mind. Thus the villain hypnotizes the damsel. As with Save the Princess, this need not be a princess. It could be anyone.

The motives can be varied, but the two most common are (1) the villain wants the captive for a lover (this is easier than coercion), and (2) to make the captive betray the hero once "rescued". When done well, it has the bonus side effect of extremely demoralizing the hero, if the beloved princess he came all this way to save now wants to kick him out the window, or worse, doesn't know him at all. How the damsel is controlled, for either motive, can be done by straight-up hypnosis, possession, or a Love Potion.

This rarely works save for cynical-enough stories. The Evil Overlord List would likely recommend this be done just to get her to cooperate in that quiet civil ceremony so you can marry her with as little fuss if possible. Anything else is just asking for trouble.

Such brainwashing can sometimes be taken as fanservice, if not outright subject to Rule 34.

A Sub-Trope of Brainwashed.

Compare Hypno Fool, Stockholm Syndrome (doing this over long term), More Than Mind Control, I Have You Now, My Pretty, Hypno Trinket, and Hypnotic Creature.

This item is... no longer being sold on the Trope Co. catalogue.

Trapped by Beautiful Gorgeous, Jimmy is hit by his own Hypno-Beam into forgetting everything that has happened.

Trapped by Beautiful Gorgeous, Jimmy is hit by his own Hypno-Beam into forgetting everything that has happened.