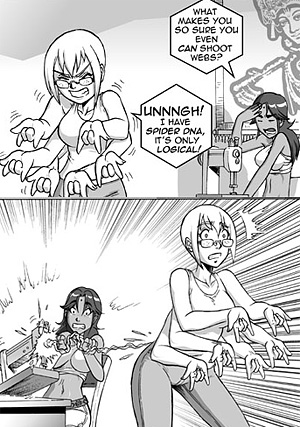 : 0 note The web comes from a gland at the base of her spine, but it's a lot funnier to imagine otherwise.
"Christ, why couldn't he have a simple superpower like Hank's PK superboy deal, instead of something that required years of training and a user manual the size of the New York City phone books?"
— Phasenote whose density control powers can result in unpredictable Jump Physics, "Ayla and the Birthday Brawl part 13", Whateley Universe
Advertisement:

You got a New Super Power or two? Great! Can you use them? While the standard hero seems to instinctively know their way around every possible ability they can obtain throughout the story, some people have to flail and struggle, with everybody laughing at them. Hey, there's all those Required Secondary Powers that you have to master that nobody tells you about!

Also applies when a character attempts to mimic or steal the abilities of a hero (like stealing their Empathic Weapon) and ultimately fails. When he is successful, the newly acquired power is too unpredictable or costly in his opinion to use in the long run, since he may lack the time or experience to perfect it. It's doubly humiliating if he's defeated by the hero anyway. This is sometimes An Aesop that a hero's strength is his character or ingenuity/skill, not his powers.

Nonetheless some are too stubborn to give them up, and may become a kind of Evil Counterpart.

One would expect this to be a natural co-trope for a Puberty Superpower, which makes it strange that this was rarely the case — most teen heroes seemed to know how their powers worked instinctively. When it does happen, the empowered teen is likely to enroll at a Superhero School or find a special Mentor (preferably with similar powers) rather than try to learn on their own.

The name comes from Something Awful's randomly renamed and incredibly nonsensical "FYAD" subforum, where it originated as a quotable quote from somebody playing the Half-Life mod Natural Selection and trying to figure out the alien faction's special abilities (shooting webs). In his frustration, he posted "how do i shot web" repeatedly. It got quickly transposed to Spider-Man because it's funnier when he says it. It has since spread wide across the Internet, as such things are wont to do.

Often follows up Powers in the First Episode. Sometimes followed by Power-Strain Blackout. Limb-Sensation Fascination can be a variant without superpowers. May be accompanied by Power Incontinence if they're that inept at controlling their powers. Does Not Know His Own Strength is the Super Strength version of this trope. See also Inept Mage, when someone does understand how to use the powers, but lacks finesse, and New Ability Addiction, when someone, upon recently acquiring powers, will try to use them at every opportunity, usually clumsily. See also Testing Range Mishap if someone attempts to test out the new powers, only to end up failing, and Assimilation Backfire.

When unlocking a new alien for the first time, Ben has trouble figuring out its powers. He even tries to do the "Spider-Man web thingy".

Alternative Title(s): How Do I Shoot Web

When unlocking a new alien for the first time, Ben has trouble figuring out its powers. He even tries to do the "Spider-Man web thingy".