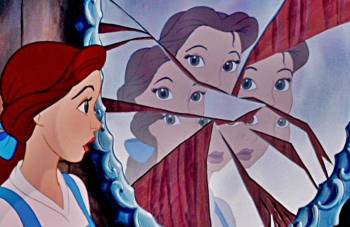 Turns out, getting turned into a monster causes many Rage Against the Reflection moments.
Advertisement:

Mirrors are traditionally seen as symbols of Vanity, since the beautiful and narcissistic (or just plain narcissistic) constantly stare at their reflection and adjust their hair, clothes and makeup. A broken mirror isn't a simple reversal however, a symbol of ugliness and selflessness...but of ugliness and insanity. The mirror casts a jumbled and distorted reflection, with missing pieces and dozens of small, fractured copies (and probably a little blood on it) and is oddly silenced. It can't reflect back a true image, and anyone normal looking at their reflection will feel a little diminished doing so.

So what does it say about a person when all the mirrors in their home are broken, and all the pictures have their face clawed or blacked or cut out? Quite simply, that they are not well.

Generally, whoever goes to the trouble of smashing all the mirrors in their home and removing or defacing all their likenesses has had some disfiguring accident or ego-destroying revelation. The destruction is a kind of "defense" against being reminded how "ugly" they've become, or how far they've fallen. Typical examples include: Beauty to Beast, vampires without reflections, and victims of a Baleful Polymorph. Where this can be especially terrifying is if the resident is normal, or even beautiful save for one tiny scar or flaw, and just thinks they're ugly due to decades of emotional abuse.

Friends or loved ones may have to use Cooldown Hugs, and other methods to get the resident to accept I Am What I Am and move on, though that's no guarantee.