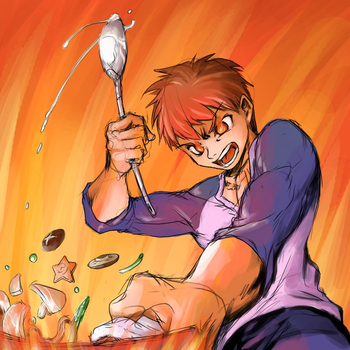 "SO AS I FILLET, UNLIMITED FOOD WORKS!"note And then we've got an entire anime about "unlimited food works".
[draws sword] "Hey, hey, hey, hey, hey, hey! Listen up, ya gigantic bozos! Having left his homeland, he never yields, never retreats, and never regrets! He faces forward, and never looks back! He's manly! He's tenacious! Kamina of Team Gurren is here to take you on! Bring it!"
— Kamina, Tengen Toppa Gurren Lagann
Advertisement:

They are burningly passionate about everything that they do. They give their all in absolutely everything they do, regardless of the task. They do not know how to be half-hearted or lackadaisical about anything they care about. These characters are Hot-Blooded.

Using the power of guts, determination, and badassery they throw themselves headfirst into the worst situations imaginable and come out on top through sheer force of will and often have a strong tendency to do impressive things. Even non hot-blooded characters or the nicest ones can occasionally have their own hot-blooded incidents; this is frequently their Moment of Awesome.

Beware if they go into an Unstoppable Rage or Tranquil Fury; someone's really managed to piss them off. Triple that for elemental or Personality Powers; they're likely Playing with Fire. Especially common in the Super Robot Genre. The hot-blooded person is usually, though not always, identifiable by a mane of scarlet hair and/or Hot Blooded Sideburns. A common trait of The Ace and, to a lesser degree, the Boisterous Bruiser. This trait is a staple of Choleric characters in a Four-Temperament Ensemble.

Not to be confused with My Blood Runs Hot, which is when a character has literal hot blood, though at least some of these characters may be metaphorically Hot Blooded as well.