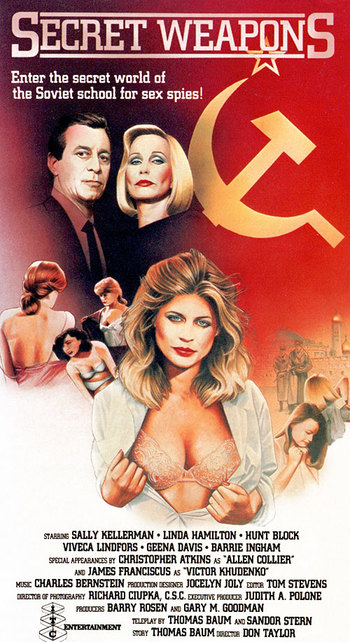 Kim Jong Un: Why did he do it! Why!?
General: He was a Honeydick, sir...
Kim Jong Un: A what!?
General: He deliberately appealed to the emotional, less rational aspects of your nature, and seduced you into advancing his personal agenda.
Kim Jong Un: But I was honeydicking HIM!
— The Interview
Advertisement:

The Mole sent to gain the trust of a specific person... horizontally. Usually female, sometimes even a heroic Fake Defector, the uniting thread is that there is one target and this one target is to be seduced. The others might be suspicious or even hostile, but that's incidental.

Might be une espionne who wears a night dress.

In Real Life, this is also a term for a grifter's Blackmail scam wherein a sexy woman approaches a wealthy married man and gets him into a compromising position (preferably in bed, though in some cases just a passionate embrace will do), while her partner-in-crime secretly takes pictures. Then the pictures are sent to the man with a demand for money; no money, and the wife gets sent copies of everything. This is the classic form; there are plenty of variations, but they all rely on using sex as bait to get someone to do something unwise, then making them regret it.

A variation of this can be seen in Japan, where a female scammer frames up a random guy in the subway for doing The Chikan and asks for a lot of money in exchange for not telling the cops. It has also been used in espionage, where the trapper gains secrets from the victim.

While the Femme Fatale Spy archetype is well-known, men can take this role as well, such as the "Romeo" agents of the East German Stasi during the Cold War, sent to seduce the secretaries of West German ministers. Other male examples may target Armoured Closet Gay men; this is an especially effective blackmail strategy if the target is married to The Beard and/or lives in a homophobic environment where being outed could threaten his reputation and safety. Or, if he's an even bigger Jerkass, a spy who is good at crossdressing may pretend to be a woman in order to seduce a straight man.note While such a scheme will sound unrealistic, or at the very least overly convoluted—Why not just use an actual woman, and risk far fewer things that can go wrong?—this has supposedly happened in real life, with one such case inspiring the play and movie M. Butterfly. In this sort of plot, the usual tropes about glamorous female spies will probably appear to be played straight... until the Unsettling Gender Reveal.

Also the name of special computers made to appear as desirable targets (typically governments or large corporations); used by cybercrime investigators for trapping playful hackers and crackers to learn their techniques.

Compare The Vamp and Femme Fatale Spy, the two character types most effective at this. See also Go Seduce My Archnemesis and Chained to a Bed. May start with The Schlub Pub Seduction Deduction. Also #31 of The Thirty-Six Stratagems, and thus one of The Oldest Tricks in the Book. Has nothing to do with actual honey... usually. For extra messiness, can be followed up with In Love with the Mark or High-Heel–Face Turn. If it's being performed by a policewoman to catch criminals, it's more likely a Dirty Harriet. For Lighter and Softer variations, see I Have Boobs, You Must Obey! and Favors for the Sexy. Not to be confused with the Innocent Innuendo that is Agent Provocateur; that job is actually very, very unsexy. Also compare Literal Maneater, where this strategy is used so she can devour the guy.

Has nothing to do with literal honey traps for capturing wasps.