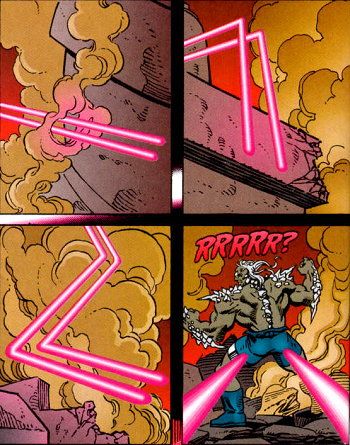 As You Know, missiles are very effective anti-vehicular weapons because when fired, they track down and follow their target to ensure they hit. This also makes them very cool. But you know what would be cooler? If we had lasers that did the same thing! Who cares if they have no known or plausible way of steering and don't possess the correct attributes to identify a target?! They make for some amazing action sequences, and that's all that matters.

If a sci-fi work contains these, it's more than likely to be on the softer side of the sci-fi spectrum.

Often causes the one on the wrong end to have an Oh, Crap! moment, especially if they think the shooter has missed, and may be Lampshaded with "How Is That Even Possible?", depending on the hardness of the setting. Or at least, how hard they think it is.

Subtrope of Energy Weapon, and Sister Trope to Homing Projectile, which can also overlap with Impossibly Cool Weapon. May involve but is not strictly limited to Roboteching and often leads to a flashier version of the High-Speed Missile Dodge.

This is NOT simply Beam Spam, where so many beams are fired that the target will get hit solely because of the sheer number of beams (though there's no reason you can't spam homing lasers). It also excludes guns that auto-tracks to keep an otherwise normal, straight-flying beam on the target and any remote reflection, refraction or beam-bending/splitting devices that can be made to aim at a target. Also does not count if the beams simply bend randomly in-flight; they must actively chase the target(s) in question.

This trope is not strictly limited to lasers per sé. Particle beams and beams of Pure Energy also count, as do beams or bolts made of any kind of in-universe phlebotinum. Hard Light projectiles also count, though only if they do not imitate the workings of conventional homing weapons. This is where it overlaps with Homing Projectile.