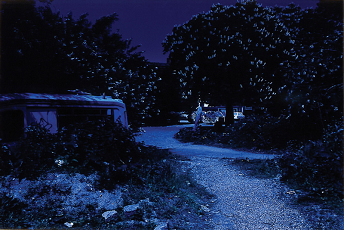 "There has to be enough light to see the darkness by."
— Moving Pictures
Advertisement:

When a character switches off the last light in the room, a vaguely bluish light slightly dimmer than normal illumination switches on. It's implied that the characters aren't supposed to see what the audience can, which makes sense; a black screen isn't much fun to watch (most of the time). Funny thing is, most of the time the characters will be unaffected by the supposed darkness, moving about without stumbling over furniture or stubbing toes. In a few cases, a red light will be used instead.

In the past, nighttime scenes were filmed in full daylight, with a blue filternote In the era of black-and-white films, the filter was red on the camera; this is known in the business as "shooting day for night" and is essentially a cost-cutting measure, since it's much easier to film a scene during the day.note There's a verse in A Visit from Saint Nicholas that goes: "The moon on the crest of the newfallen snow / Gave a lustre of midday to objects below." Day-for-night takes this ball and runs with it. It often becomes a form of Special Effect Failure — shadows don't match the flashlights, headlights or torches involved. In fact, sometimes the shadows of the supposed light sources are clearly visible. In certain cinemaphile circles this was known as "broad daynight". It sometimes remains a necessity even today, though, as with some lenses film isn't sensitive enough to shoot without enough light, or the location won't allow any practical way of hiding the lights (this is common in areas where there is no motivated light). Thanks to the advent of the digital post-production it's also much easier to do convincingly (such as doing sky replacements).

Not the same as Unnaturally Blue Lighting, which turns up even when it's supposed to be just a cloudy day or literal bad blue lights.

There is a trend for dramatic series to prefer real darkness. Similarly, it's common in Sitcoms these days for a "good night" moment with husband and wife in bed to cut to black when the lights are turned out. Someone then says something in the dark — sometimes it's a comment that prompts someone to turn the lights back on, and sometimes it's an entire conversation. And of course, video games often give you a torch for a reason. (If you don't have a free hand, or hands-free light, don't forget the duct tape.)

In black and white films, particularly older ones, there may be no difference between day and night in terms of lighting. Watch Nosferatu, The Cabinet of Dr. Caligari, or M and try guessing what time something happens. This comes from technological limitations imposed by the film stock available in those days. By which we mean that filming in darkness would have produced absolutely nothing. (In the original prints of silent films, various chemical tints were used to suggest differences in lighting.)

Occasionally this can be justified in cases where the characters are something, such as owls, which have good night vision, because then the audience would be seeing as they see even when in darkness.

Of course, should you find yourself in total darkness (such as a deep cave), you'll be able to "see" the outline of your hand, but it's literally "all in your head" — what you're really seeing is a form of 'sensor ghost' generated by your brain as it receives signals from your body.

Inverse of Nuclear Candle, which dictates that anything lit by a single tiny light will somehow illuminate the whole room evenly.

For an aversion, when single-point light sources cast shadows as they do in real life, see Chiaroscuro.

Compare Mood Lighting and By the Lights of Their Eyes, in which the scene is quite a bit darker except for the eyes of the characters or the teeth of the monsters. Contrast Blackout Basement, when everything being pitch black is the gimmick of a level or area of a video game, and Who Forgot The Lights?, a generally bad inversion where the whole thing is too dark. See also Rule of Perception for one reason why this trope exists. The common practice of using blue to represent "darkness" is directly related to Orange/Blue Contrast (specifically, the "turn up the shadows to the teal end" part).

Hannah Goes Out at Night

When Hannah goes outside at the beginning of the episode, the scenery around is supposed to indicate nighttime, even though it looks as though it was filmed during daytime.

Hannah Goes Out at Night

When Hannah goes outside at the beginning of the episode, the scenery around is supposed to indicate nighttime, even though it looks as though it was filmed during daytime.