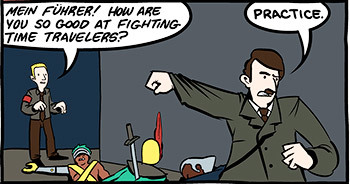 "If you time-travel into the past and then try to kill Hitler, it won't work as intended. It may even backfire."
— Rules of Time Travel
Advertisement:

If you were given the power to travel through time and Set Right What Once Went Wrong, what would you do to prevent the atrocities of the past? For many, the answer is obvious: kill Adolf Hitler. This would prevent World War II, The Holocaust, and their myriad side-effects... right?

Unfortunately, it doesn't work that way.

First of all, it often proves near-impossible to kill the man in the first place; like most dictators he's protected by various bodyguards and security forces. After all, the guy survived about 42 (known) real life assassination attempts

— maybe one of them was (or will have been) yours! Trying to circumvent these by targeting him before his rise to power begins will usually turn out to be ludicrously difficult as well. Locating a lone, disillusioned war veteran wandering around post-WWI Europe is perhaps the ultimate needle-in-a-haystack search.

Secondly, even if you do manage to kill him, something as bad or worse might appear in his place: an even smarter and crueler Führer who wins the war; or Josef Stalin takes advantage of the fact that Germany isn't invading Russia in this new timeline and the Soviet Union starts World War II; or Japan starts its own invasion with giant mecha; or Hitler becomes a martyr for the Nazis to create a new "Stab-in-the-back" myth for Germany, making World War II (or III) inevitable. In addition, if it wasn't for Hitler's nightmarish slaughter of "undesirables" that took place under his leadership, the rest of the world wouldn't have experienced the sort of collective shock upon discovery of the Holocaust that spurred them into beginning the process of purging racist elements from their own nations and colonies. To do otherwise was to essentially agree with Hitler's beliefs, something that no sane person would even contemplate after 1945.

Even worse, if you manage to kill Hitler with no backfire, millions of people from countries across the globe will now be alive when they should have died in World War II (civilians and soldiers included), which will now be averted entirely. So you get a Temporal Paradox, where Hitler's death means the Holocaust never happened, which means you will have no reason to go back in time and kill Hitler to begin with, which means you won't, which means Hitler will live... after a while you'll start to either get a migraine, wind up in an Alternate Timeline, or perhaps just break time entirely, ending more lives than a billion Hitlers ever could.

There's also the Critical Existence Failure of the time traveling assassin — unless you were miraculously lucky, or an alien who stumbled upon 1930s Germany on their own with no assistance from modern humans in any way, you couldn't assassinate Hitler without undoing your own existence. Because Hitler/WWII/The Holocaust had such an effect on the entire world, every human born after the event owes their existence to it. Preventing the war prevents the mothers and fathers of everyone from being in the right place at the right time to create the future generations that occurred — they would instead have had offspring with other people than they did in our timeline, or had them at different times, which prevents the time traveling assassin from ever existing.note Technically, this is true of all instances of changing the past, thanks to chaos theory; it's just that WWII was so far-reaching in its effects that attempting to change it is far more likely to come back and bite you than, say, killing a random tiger in the Siberian wilderness.

In short, it appears to be a cosmic law that something bad has to go down in the period between 1933 and 1945. Perhaps it's how World War II defined the 20th century; the technological advances, the political foundations, and the example of man's inhumanity to man at its absolute worst that changed whole societies' perception of evil and is ever present with us today. To imagine a world without it is to change everything. It may also be that Hitler, for all that he's considered the pinnacle of modern evil, is still a creature of his time and place; killing one man who did evil doesn't get rid of the circumstances and structure that put him in the position to do evil in the first place.

For similar reasons, Urban Fantasy usually avoids World War II in its backstory. Either it is taken for granted with no mention (as the modern world would be unrecognizable without it), the characters are not powerful enough to have changed history, or no superhuman or ancient conspiracy was involved with the peak example of Humans Are Bastards. Sealed Good in a Can is typically how this is excused if benevolent characters were both strong enough and would have been active in the 1930s and 40s. Evil ones may express disgust.

On the narrative side of things, consider the Anthropic Principle at work. Who would read a story in which someone tries to change history for the better, succeeds, and most impossibly of all, creates an utopian timeline that isn't turned into a Crapsack World by a Butterfly of Doom and/or infested with Clock Roaches, and thus doesn't need to be undone at the end (and how much of our social progress and technology were directly a result of WWII)? Plus, the idea of pitting meticulous planning and futuristic technology against a 1930s-era failed artist would be a Curb-Stomp Battle— the story would just come out to "Pew! Hitler dies." What about the other 299 pages of the book?

Ironically, it would seem that neither FDR nor Churchill (or even Stalin, when allied with them) has this immunity, because stories come up all the time about heroes having to undo a mad would-be Nazi's altering the outcome of World War II using time travel — villains simply don't care about any of the stated consequences.

Compare Joker Immunity and Godwin's Law of Time Travel. This is a sub-trope of Precrime Arrest, which is about anyone being punished for crimes that they've already committed from the perspective of the time-traveler. This is one case where attempts to Prevent the War are ultimately counterproductive.

Vox has an eight-minute YouTube video about where this trope came from. It's called Would you use time travel to kill baby Hitler?

See the Analysis page for musings on how this trope might have worked in Real Life had Hitler actually died prematurely. One last thing to think about: Is it moral if someone just shoots him before he does any evil? Do the ends justify the means? note Some works get around this moral dilemma either by preventing his conception, by killing him after he's begun promoting Nazism (which is evil in its own right) but before World War II and the Holocaust, or by getting his art school application approved or otherwise diverting him from his political ambitions. This doesn’t address the other ramifications as detailed above, though.

open/close all folders
Anime and Manga
Comic Books
Comic Strips
Film
Literature
Live-Action TV
Music
Other Sites
Tabletop Games
Toys
Video Games
Visual Novels
Web Comics
Web Original
Western Animation
Other
Besides, you know who else killed Hitler? Hitler. And you don't want to be like Hitler, do you?
Feedback

After returning the Infinity Stones, Captain America time travels to kill baby Hitler, but the TVA stops him in order to preserve the Sacred Timeline.
(Also, Hitler was born in 1889, so this must be a variant Hitler born 10 years later.)

After returning the Infinity Stones, Captain America time travels to kill baby Hitler, but the TVA stops him in order to preserve the Sacred Timeline.
(Also, Hitler was born in 1889, so this must be a variant Hitler born 10 years later.)