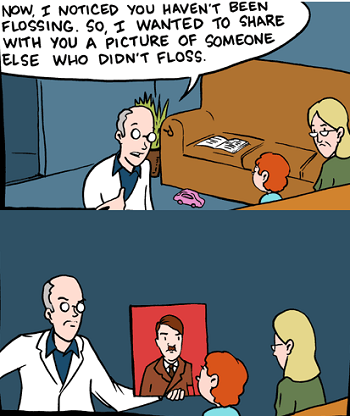 Who's gonna tell him that Josef Mengele was a dentist? note And yes, Hitler really did have poor dental hygiene.
"You know, I shouldn't have to explain this, but sharing one attribute with Nazis doesn't make you one!"
— Jon Stewart, The Daily Show with Jon Stewart
Advertisement:

A logical fallacy, specifically a sub-type of Association Fallacy, that assumes that anything done or liked by a bad person must be bad itself, taking things to absurd levels.

The premise seems to be that bad people must have a way to tell if something is evil. Either that, or bad people are repulsed by anything that isn't at least as evil as they are. Whatever the reason, bad people magically will only associate with things that are bad. Therefore, people claim a thing is bad because bad people associate with it.

This is a concept called the Association Fallacy (or the more well-known term "Guilty by Association"), which often overlaps with Godwin's Law due to how often Adolf Hitler is used (also known as

Reductio ad Hitlerum)note In grammatically correct Latin, this would actually be ad Hitlerem, because "Hitler" is presumably a 3rd declension noun. After all, Hitler has gained the reputation for being the very embodiment of darkest evil, who oozed "pure liquid malevolence" right out of his pores. So, he supposedly would only do/like/own things that are as evil as him. You know, things like sitting on a chair, wearing clothes, eating, taking a walk, and breathing. Hitler did those things, but that doesn't make them bad. Hitler is not a reason things are bad. We don't think mass murder is bad because Hitler, Stalin, or other bad people did them. We think those people are bad because they committed mass murder. In other words, this trope is backwards. A thing being bad stands on its own as bad. It would be like:

Advertisement:
Bob: I want to commit genocide.
Alice: The Nazis committed genocide.
Bob: Really? What was I thinking? I can't believe I was going to do something the Nazis did.

Still, in some cases it seems that even things like mass murder and genocide are, indeed, generally seen as less evil if they were not committed by Hitler et al. For instance, the Mongol conquests under Genghis Khan and his successors were actually far more brutal than even the Nazis (slaughtering virtually every human being in cities that hadn't immediately surrendered was common practice of the Mongol army, basically to set an example for the cities that were next in line). And while the Mongol leaders aren't often depicted as noble generals like, say, Alexander or Julius Caesar commonly are, they aren't often shown to be outright evil either. Crazy and blood-thirsty, yes, but even when these attributes are applied to them, it's often actually with hints of admiration. So why were their mass slaughterings less evil than those of Hitler and Stalin? The answer is apparently: because they simply weren't Hitler or Stalin.note Oh, and if you ask the outright fanboys, you are bound to hear the argument that the Mongol leaders were good lawmakers within their realm. So they slaughtered tens of millions of people, but managed to improve internal stability and security for the few who happened to survive. A bargain. And incidentally also the very same argument that the few remaining Hitler supporters in Germany love to use.

This is also one of the reasons why we often loath to admit that a person who we generally always disagree with may actually be right for once. Remember, Don't Shoot the Message. Someone intimidated by this "argument" may invoke No True Scotsman as a "rebuttal". ("Hitler wasn't a REAL vegetarian.")

One reason this trope exists was that for a long time during The '30s, Hitler was seen as a neutral statesman and some of his policies were appealing to people because he framed himself and the Nazis as Moral Guardians and espoused various "good-on-paper" sounding ideas like personal hygiene, cleanliness, animal rights, sexual restraint, heteronormality, battling the "excesses" of Weimar Germany and so on. Nazi Germany focused on cultural policy to an equal and at times greater extent than economics and good governance. So in some respects Hitler Ate Sugar is a Justified Trope because he and his fellow Nazis invoked Culture Justifies Anything as a key part of their platform, and Nazi Germany is a historically relevant example on the dangers of such policies and its appeals. In the contemporary context, it must be noted that this trope is deployed on arguments that have to do with "culture wars" rather than the original context of Nazi Germany (The Great Depression, Modernism, the Weimar era).

Additionally, the trope is used in American, British and other countries' politics to attack enemies on both sides of the political spectrum, at least since Red-baiting fell out of style. Suffice to say that divorcing Hitler's positions from their original context and trying to fit them into modern politics where concepts of "left" and "right" are drastically different than in Weimar Germany, is essentially a fool's errand. Worse, Hitler's "opinions" on a modern-day issue are often inferred from Nazi campaign speeches or literature from the '20s, and not policies he actually implemented once in power.

For similar reasons, this trope also has been known to overlap with You Know Who Said That?, when a person says a quote that other people would agree with at face value, but then— gotcha!— reveals it was actually said by Hitler or some other contemptible figure. Of course, as explained, that doesn't necessarily prove the idea is immoral on its own merits.

On the other hand, if it's framed very carefully there can be a valid point to be made here. If something is a demonstrably evil idea on its own terms, then pointing out how it's tied to an evil source is relevant not as a proof but as a supporting example. It might even serve as a sort of moral wake-up call. That would be like:

Bob: Greedy Jew isn't a racist stereotype.
Alice: Then how come the Nazis used it in their racist propaganda?
Bob: ... Hitler's approval fills me with shame.

A Sub-Trope of So Was X and Anti-Advice, and the Association Fallacy.

A Sister Trope to Abomination Accusation Attack (attacking people by accusing them of doing or wanting to do something inexcusably atrocious), Ad Hominem (refuting an argument by insulting an aspect of the presenter that isn't relevant to the argument's content), Chewbacca Defense (attempting to win a debate using an irrelevant logical fallacy), Godwin's Law (insinuating that a person is bad by comparing them to Hitler and the Nazis), Damned by a Fool's Praise (insinuating that something is bad by having a stupid or unpleasant person like it), Space Whale Aesop (a moral that involves bad actions having ludicrously unrealistic consequences), and Bulverism (arguing that someone must not believe an idea without actually explaining why the idea is wrong in the first place).

Often used as one of the less spurious links in a chain of Insane Troll Logic.

This trope has very similar thinking to No True Scotsman, as both are logical fallacies used to exclude or stigmatize something. It could also be seen as something of an Inverted Trope: No True Scotsman fallaciously excludes one bad example to prevent the group as a whole from being identified with it, while Hitler Ate Sugar fallaciously goes right ahead and identifies the group as a whole with the one bad example. An alternate form of inversion is What Would X Do?, when people argue that an action is good solely on the grounds that a good person did it.

Unrelated to Real Men Hate Sugar, where people come to hate something normally considered pleasant due to cultural expectations of what is considered "mature" or "masculine". If Hitler is shown hating sugar, it would likely be a case of Bad is Good and Good is Bad, but still counting as this trope if sugar is portrayed as good entirely based on Hitler's dislike of it as a result. As such, unless it is used to demonize sugar and the people who eat it, this trope also has nothing to do with Hitler's well-documented fondness for sweets.

Please note that this page is for examples where X is claimed to be bad due to being done, eaten, read, watched, or what-have-you by demonstrably bad people. It's not for cases where the meaning is more "Look, just because he/she/it does/eats/reads/watches X, doesn't mean he/she/it is a good person." It's the difference between the fallacious argument "Hitler ate sugar, therefore sugar is bad" and the valid argument "Even Hitler ate sugar. Eating sugar does not automatically make you nice".