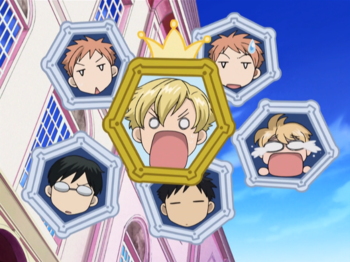 Light-hearted moments in Anime are frequently set up by showing a long shot of the wider area around a group of characters (or a shot of a map of the area), with the characters appearing as talking heads within wobbly multi-colored hexagonal comic strip-style speech balloons. This frequently emphasizes the space that the characters must deal with: wilderness that they must cross, an entire neighbourhood that they must search, or so forth. It can also be used as a lower-budget way to show a group of people having conversations all at once.

This is, of course, a holdover from comic book panels, particularly Odd-Shaped Panel.