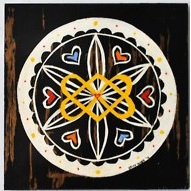 An example of a contemporary hex sign by artist Hunter Yoder.
Advertisement:

Hex signs are a form of Pennsylvania Dutch folk art, related to fraktur, found in the Fancy Dutch tradition in Pennsylvania Dutch Country. Barn paintings, usually in the form of "stars in circles," grew out of the fraktur and folk art traditions about 1850 when barns first started to be painted in the area. By the 1940s commercialized hex signs, aimed at the tourist market, became popular and these often include stars, compass roses, stylized birds known as distelfinks, hearts, tulips, or a tree of life. Two schools of thought exist on the meaning of hex signs. One school ascribes a talismanic nature to the signs, the other sees them as purely decorative, or "Chust for nice" in the local dialect. Both schools recognize that there are sometimes superstitions associated with certain hex sign themes, and neither ascribes strong magical power to them. The Amish do not use hex signs.

In recent years many artists have created more modernized versions of hex signs, which tend to differ from tradition due to the choice of symbols used, the locations in which the hex signs are hung or painted, and the materials used. A particularly controversial example includes the use of sexuality and sexual imagery, such as the "In Between The Sheets" hex series by Hunter Yoder and Henrietta Fischer.