He Who Fights Monsters 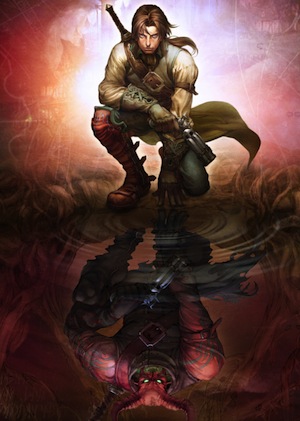 ...will become no better than the monsters he slays.

A significant reason why this happens is the avenger's motivation. He who seeks justice is out to stop the villain from hurting any more people, because he doesn't want them to suffer like he has; and while he may be ruthless in pursuing the villain (and may even be willing to kill the villain if they are dangerous enough), he's ultimately looking to benefit society, so long as he doesn't forget his cause. Meanwhile, he who seeks revenge is out to make the villain suffer for what they did to him, believing that he has the right to inflict pain. He's not looking to improve society; he's doing it for his own sake.

Revenge Is Not Justice is more of a response that's invoked in an effort to stop the person from becoming a monster. If the person has become a monster, then Revenge Is Not Justice is invoked to call them out for becoming a monster. Vigilante Injustice is often the starting point of a hero's descent into villainy as they have killed someone in self-defense or they killed the villain under the belief that it's the only way to get rid of a villain who's truly irredeemable.

What Do You Sacrifice?

Luthen knows what he has become in his quest to build the Rebellion and take down the Empire.

What Do You Sacrifice?

Luthen knows what he has become in his quest to build the Rebellion and take down the Empire.