Heroic Fantasy
aka: Swords And Sorcery 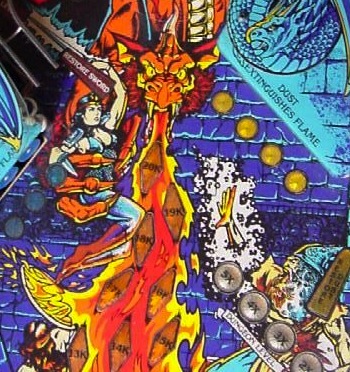 Muscular heroes, magical wizards, fire-breathing dragons, and a little Fanservice as well.
Circles and rings, dragons and kings
Weaving a charm and a spell
Blessed by the night, holy and bright
Called by the toll of the bell!
— Black Sabbath, Neon Knights
Advertisement:

The exploits of mighty-thewed, sword-wielding heroes and their thiefly, wizardly and/or priestly companions, as they spend their days smiting evil, fighting monsters, recovering treasures and quaffing ale.

One of the three typical settings for fantasy literature. High Fantasy usually focuses on the epic struggle between absolute good and absolute evil, and the characters are thrust in the midst. Low Fantasy portrays the struggle of characters to achieve their own personal goals, ranging from questionable to decidedly unsavory.

Heroic Fantasy sits somewhere in between. It tends to be distinguishable from High Fantasy by its scale—the problems are generally those of the heroes, not the world. Kingdoms and societies are portrayed mainly to the extent the heroes have an impact on them. On the other hand, it's distinct from Low Fantasy as well in that the heroes are actually heroic and their goals are morally sound or, at the very least, not overtly objectionable. An Anti-Hero in this setting is more likely to be a Lovable Rogue than a Well-Intentioned Extremist.

The setting differs as well: it is neither fragile and in need of saving, nor a Crapsack World with wickedness Inherent in the System — rather, it's an ambiguous place, characterized more than anything by being an Adventure-Friendly World, with much untamed wilderness to travel through, quests to undertake and dungeons to delve. Therefore, the heroes are very likely to encounter magic and fantastic elements, assuming they aren't prevalent in the setting to begin with.

The first story of this type is often considered to be Lord Dunsany's "The Fortress Unvanquishable, Save for Sacnoth" from 1908, but it is 1929's "The Shadow Kingdom" by Robert E. Howard that is responsible for kick-starting the genre proper. Howard himself would later go on to codify the genre with his Conan the Barbarian tales.

Heavily influenced by The Hero's Journey, Arthurian Legend, the Conan the Barbarian stories and movies, the game Dungeons & Dragons, and Classical Mythology.

Sometimes set in a world that looks an awful lot like medieval Europe, although it can range all the way back to a "forgotten prehistory" such as in Conan the Barbarian, or be set in the more concrete history of our world, such as the "classical antiquity" period (ancient Greece, Rome, etc.) or even earlier (ancient Mesopotamia, Egypt, etc.) as found in Xena: Warrior Princess which merrily mixes the settings up. Stories set in the ancient past are sometimes called "Sword and Sandal" and can overlap with Historical Fantasy. May involve Mythopoeia, the further in the past it goes.

Sometimes it can be found in the future, often in After the End setting; sometimes it comes close to Planetary Romance. Also often features Medieval Stasis.

Often lumped together with Sword and Sorcery, a genre coined by Fritz Leiber. Unkind souls have described Heroic Fantasy as nothing but an upmarket term for Sword & Sorcery, though Leiber deliberately created it to set his stories and similar works by other writers apart from the general field of Heroic Fantasy. The main difference between them is that Sword and Sorcery stories tend to be much darker and grittier in terms of tone, content and characterization, while keeping similar story structures, plotlines and tropes as Heroic Fantasy works.

Good live-action film and television heroic fantasies can be counted on the fingers of one hand (generally starting with the Conan the Barbarian movie). Dying is easy. Fantasy is hard! On the other hand, roughly half of all RPGs ever written fall under this genre, if not more.

For heroic and epic fantasy applied to non-Medieval European Fantasy settings, see Wuxia (fantasy of Chinese cultural origin), as well as Dungeonpunk (which is which is what happens when you take the general attitude of heroic fantasy and remove the Medieval Stasis in favor of Magitek).

Nor to be confused with Demythification, which is Mythology reimagined as Historical Fiction.

Perhaps you would be interested in writing one yourself?