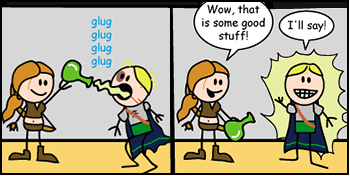 So good it even fixed his cape.
"Everybody knows if you find a first-aid kit with all its fuckin' hypodermic needles in the trash, first thing you should do is eat it!"
— JonTron, Game Grumps (Mighty Morphin' Power Rangers: Morphing Time)
Advertisement:

When heroes are injured and have to heal themselves, the favored method is to quaff a Healing Potion. Typically this item is mostly used in Fantasy settings, but it can easily be adapted to other Speculative Fiction stories as a form of Applied Phlebotinum made of Nanomachines or whatnot. It can be as common as a Standard RPG Item, a one-of-a-kind MacGuffin, or somewhere in between.

Healing Potions are an old, old trope. Many fairy tales, legends, and myths have a medicine woman or even goddess come to an ailing hero with a cup of Ambrosia, Dragon's Blood, or other magical elixir that reinvigorates the hero to continue their quest. It rarely ever has unpleasant side effects, but you never know. When Silver Has Mystic Powers, it makes a good way to brew and/or hold these.

Typically, it restores Hit Points depending on the quality of the potion. Some can bring back the (near) dead, and others will barely clot papercuts. Depending on its use in the plot it may even function as a one-time Healing Factor that can remove scars and regrow lost limbs. As an added bonus, lobbing one at a zombie is sure to harm it.

A staple of First-Person Shooter games on the classic end of the Fackler Scale of FPS Realism; more simulational shooters tend to go for Regenerating Health or more complicated first aid management. Roguelikes also tend to have them, and most of them have multiple types of varying potencies, with the more potent sometimes also being Anti-Debuff.

Compare Healing Herb, which may be an ingredient, and Healing Hands.