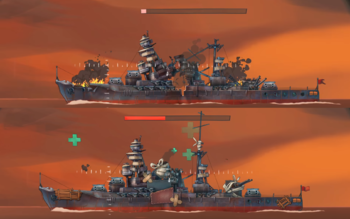 Why does a battleship need a band aid?
Bloke goes to the Doctor, and after a cough
Says, "Sorry to whinge, but my leg's been blown off
I've got one leg, and I used to have more
I'm bleeding all over this nice clean floor
I think I'll need some of that tourniquet shit."
The Doctor said, "Or just use a health kit."
— Ben Croshaw, "The Field Medic"

When video game characters get shot, slashed, burned etc., they can usually count on finding a box of medical supplies or similar, with which they can instantly restore their health. Even back up to one hundred percent, which presumably means all cuts and bruises are completely gone. They don't even seem to need to apply the medication, or even open the package — as soon as they pick it up, their health is improved. Imagine that. In fantasy they usually have the character eat special fruits or partake of elixirs and say A Wizard Did It. In sci-fi, the character will shoot up with Nanomachines and say pretty much the same thing.

There are some ways of lessening this effect. One is to hint that the Life Meter is actually indicating how badly affected the character's armor is, and one is simply patching up one's suit. Another, in sci-fi stories, is to allow the character's armor special medicinal abilities, which just requires health to be picked up or downloaded off an installed device.

Most classic healing items work instantly, but some modern games give them a delay time. Using one gives the player a "ghost" Life Meter, which works its way up to the level indicated over a minute or so. Taking any damage may nullify the effect. This keeps a player from using one in heated combat to stay alive.

A corollary to this trope is that no matter how hurt your character gets, even if they're an inch from death, they can still run around killing things with as much vigor as ever. This often applies to the enemies, as well. This can be interesting in strategy games, where a large unit is still doing 100% damage at one HP, and smaller units that collectively cost the same are losing effectiveness one by one as they die. Some titles reduce speed and damage linearly with HP, but this is equally unrealistic.

As a side note, the International Red Cross Society has been raising some legal issues over the repeated use of their trademarked Red Cross logo on health items in video games. See this article from the Canadian Red Cross.

The generic logo for commercially available "First Aid" products in reality is a white cross on a green field for businesses not directly affiliated with the Red Cross Society, to conform with the Geneva Convention (the Red Cross logo is protected). It's a serious issue.

An extreme, but common, subset of this trope is Hyperactive Metabolism, where you are instantly healed simply by eating.

See also Heart Container and Healing Potion, and beware of the Poison Mushroom. Compare The Medic and Healing Hands, which are people and abilities that heal others, and can possibly heal themselves. This trope is just about one person, being able to heal themselves only, in a way that's not automatic Healing Factor.

Not to be confused with Self-Surgery, an often much more disturbing trope.