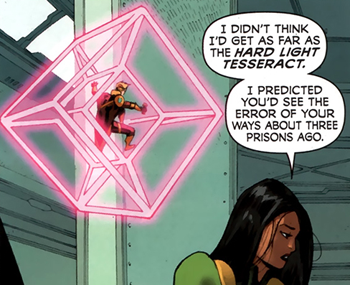 The impossible technology we're fine with, but we draw the line at a 5-dimensional hypercube being perceivable.
The Flash: [faced with half a dozen clones of Luminus] This is supposed to scare me? They're just illusions.
Luminus: [starts beating the crap out of Flash] I can make light solid, chump.
— Justice League, "Only a Dream"
Advertisement:

Tucker tries to take down Felix by charging him from behind, but Felix just puts up his light shield and lets him bounce off without even looking his way.

Tucker tries to take down Felix by charging him from behind, but Felix just puts up his light shield and lets him bounce off without even looking his way.