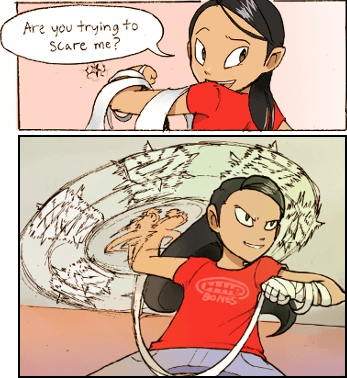 "It is a funny thing how differently the various races react to such a situation (under Japanese mortar fire). A British soldier would have called out to me to take shelter and would have made room for me beside him. The average Indian sepoy would have watched anxiously, but said nothing unless I was hit, when he would have leapt forward and risked his life to get me under cover. A Sikh would have sprung up, and with the utmost gallantry dramatically covered me with his own body, thrilled at the chance of an audience. Only a Gurkha would stand up and laugh."
— (then) Lt. Gen. Bill Slim
Advertisement:

An athlete in a race, an adventurer on top of a train, a pirate boarding a ship, a cunning politician executing an amazing plan, a Lovable Rogue during a Swordfight, a warrior during a Last Stand, two friends sparring—anyone facing an interesting and fun challenge with a reasonable chance of failure will sport one of these smiles. It's usually a bit forced, showing the strain and stress the user is under, and sometimes there could be a certain edge of malice and aggressiveness to it, even insanity: a hint of Blood Lust, to be precise. Alongside genuine heroes, it's also very common amongst AntiHeroes of the Unscrupulous and Nominal types as well, especially if they are young and/or adrenaline junkies. It is usually coupled with a steady gaze, even a frown of sorts.

It may overlap with Dying Smirk.