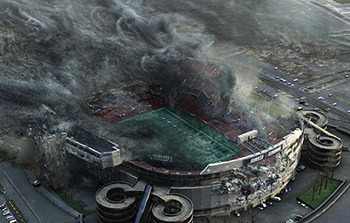 Nom nom nom, om nom!
"'Plants' with 'leaves' no more efficient than today's solar cells could out-compete real plants, crowding the biosphere with an inedible foliage. Tough, omnivorous 'bacteria' could out-compete real bacteria: they could spread like blowing pollen, replicate swiftly, and reduce the biosphere to dust in a matter of days. [...] Among the cognoscenti of nanotechnology, this threat has become known as the 'gray goo problem.'"
— K. Eric Drexler, coining the term
Advertisement:

Grey Goo is like a Horde of Alien Locusts, only replace Alien Locusts with Nanomachines or any other self-replicating material — and instead of grass, they "eat" anything. Or, if the protagonists are lucky, just anything mineral, metal, or electronic.

They're worse than alien locusts. Grey Goo destroys resources by turning them into more grey goo — more nanomachines or whatever matter the grey goo is composed of. It's The Virus for nonliving things — though it may be able to take down living things as well, and likely will turn them into nonliving things if they're in the wrong place (i.e.: outside). In theory, you can end up with a planetary body made of nothing but grey goo. Physical laws regarding energy, thermodynamics and the like are an obstacle, but even a partial success in this case is likely to suck for everyone involved.

If you want to guarantee large scale destruction with free Green Aesop implications, make your goo specifically designed to clean up oil spills so that it has a built in taste for organic compounds, and is hard to kill.

Can cause The End of the World as We Know It — typically anything up to Class X on Apocalypse How — and is very often considered a Superweapon as a result.

Compare Blob Monster, Planet Eater, and Clone by Conversion. For the Real-Time Strategy game about (and playing as!) the grey goo, see Grey Goo (2015).