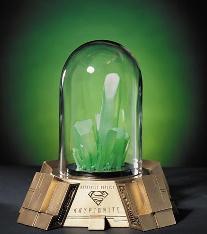 Krrrryp-tonite!
Dr. Dinosaur: Imbecile! You'll kill us both! The crystals power this entire station!
Robo: I thought you said it was an anti-gravity crystal.
Dr. Dinosaur: It can do lots of things!
— Atomic Robo

An object or technology with powers so diverse and magical that it can cause almost any effect as needed by the plot.

If an actual substance, a common variation is to have it come in different colors, each with a varying set of effects. This occasionally ties in with Elemental Rock–Paper–Scissors, with each color variation attuned to a different classical element.

The name refers to the Kryptonite meteor rocks found in most incarnations of the Superman franchise (which were most famously, but not always, green). These Green Rocks, in addition to functioning as Big Blue's primary weakness, have been known to: give people random superpowers, turning them into the Monster of the Week; help people recall memories; make cars go faster; and send a phone call back in time, among many other things.

When it is exotic, difficult to find, and you must have it to power the Applied Phlebotinum, it is Unobtainium. When the Green Rocks are crystals that double as a Gotta Catch Them All, it is a Mineral MacGuffin. If Green Rocks are animal or vegetable rather than mineral, they might be domesticated as a Multipurpose Monocultured Crop. If the Green Rocks are spread across a range anywhere from a small town to the entire world, area-of-effect Green Rocks so to speak, then it may constitute as a Mass Super-Empowering Event. It can also be a source of great evil: see Repo Man and Heavy Metal.

Why green? Why do they glow? They're made of uranium glass! It glows when exposed to that mystery radiation, ultraviolet light.

This is sometimes used in video games as a Plot Coupon, for the reason that game designers often have the pieces of whatever it is being in different lands/environments/cultures, riffing the level design and changing the reason as to why this super mega artifact is being used to power a dance club.

Contrast substances under the well-defined Minovsky Physics, which is where something has a variety of, but internally consistent, powers.

When it is a standing device to attract weirdness to the characters, it is a Magnetic Plot Device.

Related to Phlebotinum du Jour, Meta Origin. For less-exotic variants, see Lightning Can Do Anything, I Love Nuclear Power and Genetic Engineering Is the New Nuke. Contrast Minovsky Physics, Magic A Is Magic A.

open/close all folders
Anime & Manga
Comic Books
Green Lantern (1941): Despite all the differences between Alan Scott and all the other Green Lanterns that would follow, it's interesting to note that even in his 1940 origin story, the source of Alan's power is extraterrestrial Green Rocks. A burning green meteor crashes in China, and it is first formed into a lamp, then a lantern, and finally comes to Alan Scott to grant him power.
Fan Works
Films — Animation
Films — Live-Action
Literature
Live-Action TV
Tabletop Games
Video Games
Web Animation
Web Comics
Western Animation