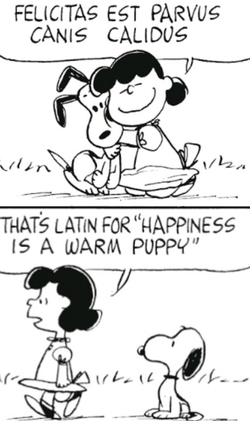 Latin carries an implication of importance, classiness and mysticism. Despite being a dead language,note  meaning no culture uses it as their native tongue, it retains an association with magic, religion, politics and science. It is the language of those who know secrets and have uncovered ancient mysteries, and creators use it (or something that sounds like it) for those associations.

The Latin Language is still taught and utilized for many people and it's the root of numerous living languages today, making it both accessible for creators/audiences and maintaining the connotations with magic (Stage Magicians using pseudo-Latin incantations like "hocus pocus"), religion (Latin is the official language of the Catholic Church), law and debate (e.g. legal terms such as "habeas corpus" are in Latin, argumentation tropes and logical fallacies have Latin names), schools and school-based organizations choosing a Pretentious Latin Motto, and science (The tradition of Greco-Romanism is most exemplified in the field of taxonomy). As such, many writers are fond of inserting Latin into their stories for any number of reasons. The fact that it may not really fit in or seem out of place isn't really relevant: Frankly, it just sounds cool.

This is a Sub-Trope to Gratuitous Foreign Language, where creators include foreign words (and close-enough foreign words) for a variety of reasons.note Reasons that can include making you sound like a pretentious ass. For help in parsing some of the Latin present in examples, please read the Latin Pronunciation Guide.