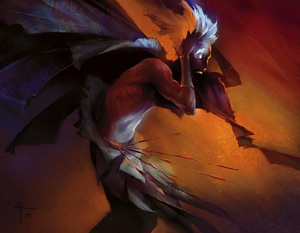 Just one look was all it took; before one word was spoken, his mind was broken.
"The most merciful thing in the world, I think, is the inability of the human mind to correlate all its contents. We live on a placid island of ignorance in the midst of black seas of infinity, and it was not meant that we should voyage far. The sciences, each straining in its own direction, have hitherto harmed us little; but some day the piecing together of dissociated knowledge will open up such terrifying vistas of reality, and of our frightful position therein, that we shall either go mad from the revelation or flee from the light into the peace and safety of a new dark age."
— The Call of Cthulhu
Advertisement:

In many stories, there are some experiences that are so horribly mind-shattering that the usual result is stark raving madness. We're not just talking about mundane Shell Shock here, that'd be the trope called Heroic BSoD. Instead we're talking about a full-fledged Freak Out, an Identity Breakdown (if the experience was related to a character's identity), or possibly even as bad as a Face–Heel Turn. If you Go Mad from the Revelation, you're gonna have some sort of psychotic break.

This is a signature characteristic of an Eldritch Abomination and one of the central tropes of the Cosmic Horror genre, but other things can cause it as well, such as prolonged torture or learning some other Thing that Man Was Not Meant to Know.

There is generally a distinction between things that happen to the mind because of experience and things that are done to the brain. This trope is the former. Thus, Chemically-Induced Insanity, Psycho Serum, a telepathic attack, or a specific, quasi-magical effect (like certain types of Brown Note) doesn't qualifynote unless the focus is less on the stimulus's direct neurological effects and more on how it shows you something too terrible to behold: for example, if the drug opens your psyche to mind-shattering secrets, if the telepathy transmits information or sensations that your fragile psyche can't take, or if the Brown Note breaks you because what you're perceiving is already too much to comprehend and doesn't even need to magically attack your brain. Contrast those things with H. P. Lovecraft's shoggoths, who strain people's sanity in spite of never having that as a stated special ability—the thought of them is just that horrible. Confronting a Creature From Beyond The Stars or a Thing That Should Not Exist will lead either to psychological regression into denial, or insanity when the cognitive dissonance becomes too great. Lovecraft was fond of these; his stories abound with creatures from regions of space where the known laws of nature do not apply, and geometries that violate the laws of physics.

This almost could have been Truth in Television, insofar as Post Traumatic Stress Disorder is a real mental illness, but a character who Goes Mad from the Revelation usually is portrayed in a more generic insanity.

Sometimes, if you whack someone with the "insane stick" enough times, they'll get Bored with Insanity.

The main inspiration for this trope is the work of H. P. Lovecraft, whose story The Call of Cthulhu is the Trope Namer. Occurs in most of his work and a good deal of Lovecraft-inspired work that use Mad Gods and Eldritch Abominations, indeed Cthulhu-inspired RPGs often make this a game mechanic. Will be mostly absent from stories where you can punch out Cthulhu successfully.

The extreme form of a Freak Out. May take the form of a Heroic BSoD where the thing isn't going to start working again. If the whole nature of the Universe is opened to you because of your velocity, this is Ludicrous Speed.

Compare with Brain Bleach (the character is afflicted by squicky mental images), Brain Fever (the character is made ill by mental stress and trauma), My God, What Have I Done? (the character is wracked with remorse), and My Skull Runneth Over (the character is overwhelmed by the sheer amount of information stuffed into his brain). See also A Form You Are Comfortable With for a way to avoid this. Often goes hand-in-hand with the Despair Event Horizon, to the point where a number of examples on this page can be found on the other as well.