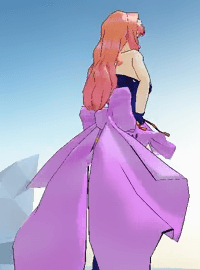 Sashaying with a sash.
Advertisement:

A ribbon, sash, or obi

that is worn on the waist, tied like a bow, and large enough to see from any angle.

Ribbons like this aren't unheard of in Real Life, but rarely as large as in the trope (except for the obi), and smaller ones are used on dresses as a pretty alternative to a belt, especially if it matches bows already on the dress. They just aren't as likely to be that big.

This trope is applying Bigger Is Better to that, likely because the artist or costumer feels it adds a recognizable point for the outfit, or a character wearing it has a Limited Wardrobe.

Also, the rest of the outfit doesn't really matter. It can vary from a Pimped-Out Dress to even a Chainmail Bikini.

Compare Showgirl Skirt (which this can even substitute for), Peacock Girl, Giant Poofy Sleeves.