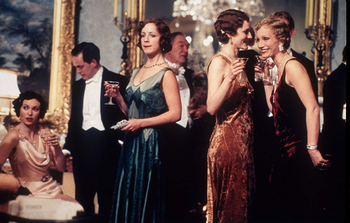 A (usually) unspecified date somewhere between the end of World War I in 1918 and the commencement of World War II in 1939. A time of women in evening gowns and gentlemen in dinner jackets mingling at well-to-do cocktail parties, rich tweed-clad country gentlemen and hard-boiled detectives who are veterans of World War I. Lots of action takes place in big country houses and small surrounding villages in the countryside, often involving (depending on the author/genre) either wacky romantic misunderstandings or cold-blooded acts of murder, both of which evolve around complex, labyrinthian schemes. In the more urban areas (usually either London or New York), there's lots of Art Deco around, swank parties, heavy drinking, and gay repartee. While The Roaring '20s and then The Great Depression both took place around this period, the rather conservative and patrician milieu of the Genteel Interbellum Setting tends to keep the era's real-world social, cultural, and political upheavals somewhat at arm's length.

This trope was formerly named "Christie Time" after the period when most (if not all) of Agatha Christie's Hercule Poirot novels are thought to be set (they actually cover a time period of 1916 to the early 1970s, suggesting that Poirot lives to be over a hundred years old) and when all said TV adaptations are set. It could well have been called Wodehouse Time also.

The historical name for this period is the Interbellum, hence the name. Later portrayals may see it combined with Diesel Punk.

In his short story Umney's Last Case, Stephen King refers to a temporal variant, Chandler American Time. Here, the action is set at the very end of the period, just before America enters the War in 1941.

In Genteel Interbellum Setting and Chandler American Time the time from 1918-1941 is usually idealized, while in Diesel Punk it is the opposite, often containing critical deconstruction of the values of those times.