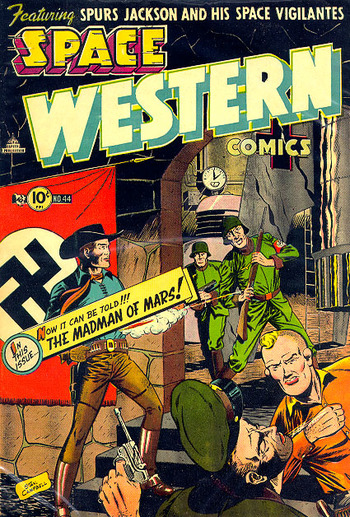 Cowboys versus Nazis, in Space!
"So settle in one more time for the action-romance-comedy-drama-kids movie for adults."
— Honest Trailers for The Princess Bride
Advertisement:

A mixture of seemingly disparate genres together. After all, if two genres are already awesome on their own, then combining them will result in something even more awesome, right? Well, maybe, if you get the balance between the genres just right. Otherwise, you risk having an Uncertain Audience or Audience-Alienating Premise: a Romantic Action Comedy flick could attract both Action fans and Romantic Comedy enthusiasts, but it's just as likely that the elements of one genre will turn away fans of the other.

For works which use multiple, disparate genres without actually mixing them together, see Genre Roulette. Compare to Recycled In Space where a new genre may be pasted onto an existing story. If a character is this instead of a story, see Ninja Pirate Zombie Robot. If a character from one genre ends up in the setting of another, see Genre Refugee. Compare and contrast with Genre-Busting, where a work fits into no genres rather than multiple. See also X Meets Y, Mix and Match, and Hybrid Genre. May involve Anachronism Stew.

Examples from Genre-Busting not yet sorted:note The subpages also include unsorted examples regarding those genres.

MatPat brings up how Star Wars mashes up a whole lot of genres throughout its franchise of movies, cartoons, and shows.

MatPat brings up how Star Wars mashes up a whole lot of genres throughout its franchise of movies, cartoons, and shows.