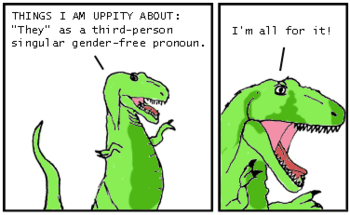 Many times, a writer of fiction wants to give a character an Ambiguous Gender. It might be because it's an important detail in the mystery or because the character is really in disguise and the writer doesn't want any potential crossdressing stigma. Or possibly they really are of a non-binary gender, and the author is trying to accurately represent their identity. The easy solution is to only have the character be directly addressed, but what happens if you need to have other characters talk about them?

Enter Gender Neutral Writing. In English, this is when every attempt is made to avoid any use of the pronouns "he", "she", "him", "her", or any references to the gender identity of a character.

English ranks about middle in the difficulty of pulling this off, since most words in English do not need to be gender-specific, and even most nouns can be fairly flexible too. However the gendered pronouns are very ingrained into normal dialogue, especially when one is referring to other people, and there aren't too many alternatives ('they', 'their' and 'them', mostly), so it's painfully obvious when you are trying to conceal gender (though there are some tricks that make it easier), almost always enough to draw attention to itself. This may not be a bad thing if the whole point is that they are a non-binary gender, since you will obviously be using their preferred pronoun. A partial solution, even if you have a binary character whose gender you are trying to conceal, is to have characters who don't know use gender-neutral pronouns such as they/them or ze/hir, not only for them, but also for other characters, if the setting allows it.

And let's not forget the far more strongly-gendered languages (like Spanish or German) where pulling this off without looking or sounding 'fake' is... at least very difficult. note In German the only established third person singular personal pronouns, "sie" (her) and "er" (him), are clearly binary gender marked. However, it does get easier in other grammatical forms: first and second person personal pronouns are not gender specific and neither is the third person plural. There are also other problems concerning binary gendered language, e.g. since many (common) German nouns are (binary) gender specific. e.g. "Alex is a police officer" would have a (slightly) different German noun depending on Alex's gender ("Alex ist (eine) Polizistin [woman]/ (ein) Polizist [man]"), although the name wouldn't tell. But there are ways to come by which normally won't cause (much) attention: the participle forms in plural are the same for masculine and feminine grammatical gender ((female) workers: Arbeiterinnen; (male) workers: Arbeiter; workers (regardless of gender)/ working people: Arbeitende (participle)). Often you can avoid the gender specific noun. ("Alex works for the police.")

On the other hand, languages on the other end of the spectrum (such as Japanese and many East Asian languages) don't bother with pronouns much anyway, making it much easier and more natural to obscure a character's gender (which explains why localization teams have so much trouble with this issue in anime and video games).

This is most common in interactive fiction designed for players and avatars of any sex and gender. This generally shows up in games where the developers were too constrained (or, perhaps, too lazy) to have the game capable of modifying the dialogue to fit all genders, so they try to write for all. This leads to a Featureless Protagonist (although as that article mentions, they more often than not fail because they assume Most Gamers Are Male). The Gamebooks genre makes heavy use of this (along with Second-Person Narration), since they won't exactly split the book into volumes to accommodate everyone. Often, they get around this by either assuming a gender based on the genre of the book (e.g., a science fiction book would assume a male reader while a book that places the character as nobility in medieval Europe would assume a female reader) or by just creating a very generic character with a Purely Aesthetic Gender. This is also the main reason Choose Your Own Adventure books are written in the second person. It's not entirely rare for it to show up in other fiction, though.

A special mention also goes to websites (such as this one) that cover these works and have to refer to both while not favouring one or the other. Having a gender-neutral name or a surname helps a fair bit, but it gets much more difficult if the character has no surname but different first names depending on the gender. In these cases "they", "s/he" or an appropriate title like Commander or misthios are used instead.

See also Pronoun Trouble, which is when translation issues cause the natural-looking gender neutrality to quickly break down when attempted in other languages.

A (non-existent) ghost is referred neutrally.

A (non-existent) ghost is referred neutrally.