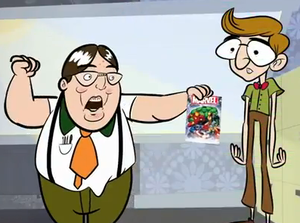 When they're not Nerds Are Sexy, they must be one of these.
"No! My weak nerd arms!"
— Luz Noceda, The Owl House
Advertisement:

That thing where geeks and scientists are always fragile, skinny guys without a shred of muscle to their names. Except when they're morbidly obese and/or neckbearded. Rarely do we see an athletic, rugged, or only mildly pudgy geek, because they are Squishy Wizards.

While both versions of geek have been around for some time, the "geeks are skinny" image is slowly being displaced by "geeks are fat" as the world obesity rate rises. The hours of inactivity and unhealthy eating habits are sufficient justification and can cause this to be Truth in Television. The older form also has justification in the "Forgets to Eat" aspect of things, or possibly because Crack Is Cheaper and therefore the geeks only spend the bare minimum amount of money on food that they need to in order to stay alive while pouring the rest of their income into their hobbies (which explains why the Basement-Dweller is almost always a fat geek; he doesn't buy his own food so he has more of it to eat). The reverse is also true as those entering such industries age and realize they're losing their youthful metabolisms and as such professions become more of a career and less a stepping stone to bigger and better things.

Occasionally coupled with a Nerdy Inhaler and/or a nasally voice to try and justify it. Badass Bookworms often, but not always, avert this. May overlap with Fat and Skinny if both are in the same scene together.

Luz is a 14 year old fantasy geek, which isn't exactly conducive to building up a lot of muscle.

Luz is a 14 year old fantasy geek, which isn't exactly conducive to building up a lot of muscle.