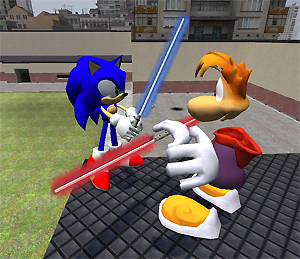 The Mod is strong with this one.
Some say that you can't improve on perfection. The Final Fantasy VI mod, Beyond Chaos, proves you can. Here, Yoshi is the new king of Figaro, and Master Chief is his twin brother.
— Scott White

Just because the game designers made a good game doesn't mean you can't make it even better. Or at least different.

Game modifications, or "mods" for short, are any alterations to a game that were not made by the game's license holder. They can be unofficial Expansion Packs (new maps or new equipment in the same game), completely unrelated games that merely use the source game's software as a backbone ("total conversions"), or just quality-of-life adjustments to the original, such as Fan Translations, bug fixes, character Cameo appearances (which can often lead to Ninja Pirate Zombie Robot scenarios), or House Rules. (Or, if the game includes any attractive women or men, nude patches.)

Some games are deliberately designed to be easy to modify, including a "construction set" of sorts to build levels, weapons, etc., and whole modding communities spring up as a result. However, some types of mods are discouraged, or even cracked down on, for good reason: If it's a multiplayer game, a mod in the hands of a player but not their opponent usually means an unfair advantage. (Some God Modders will use these anyway and hope they aren't caught.) That's why multiplayer games are usually exempt from mods or, if running on a modular engine, deliberately designed to be hard to mod (example is that most online multiplayer of any Source engine games has a "Pure" server settings which disables any mods including texture replacements).

A few mods take advantage of content that was programmed into the game in the early stages, then scrapped from the final design. Unless space is a big issue, the programmers usually leave all this content Dummied Out in the game's code. This leaves an opening for a modder to re-introduce an access point and enjoy the missing content... albeit at their own risk, since it's usually unfinished and untested. A safer and more generally successful approach is to overhaul the graphics. PC hardware becomes more advanced over time, making it capable of handling more detailed graphics; this helps keep an older game looking new and fresh and thus helping to keep it alive among the community, as well as helping to prevent the game from being overwhelmed by current-gen games.

It's much easier to mod a computer game than a hard-coded console game, but creative adjustments to a save file (and, with the most recent generation of games, console hard drive content) and/or use of a GameShark allow determined amateur programmers to mod with the best of them. Most often, however, mods of console games are edits of the ROM files used in Emulation. These tend to be referred to as "ROM hacks" and are usually considered a separate scene from mods, as running a mod is intended behavior of the original software especially in the case of games that offer an official avenue for modding, or alternatively, as mods are designed for games on open platforms such as the IBM Personal Computer and Apple Macintosh, while playing a ROM hack requires patching the game's binaries (or performing some other kind of hack) and copying said binaries to a flash cart or burned to a discnote And in the case of more recent systems, performing some kind of modification to the consoles for them to run unsigned or modified code.

Early ROM hacks were largely present in Famiclone consoles and cartridges, especially where the said system wasn't officially released. Cartridges contained graphics hacks very often. The most common ones were those where the main character was replaced by Mario, passing them off as an "installment" in the Mario series such as in the case of the now-infamous 7 Grand Dad.

Unfortunately, ROM hacks are probably the biggest example of Sturgeon's Law. In the mid-oughts, a great many ROM hacks consisted of little else but tons of offensive and poorly drawn graphic hacks like profanity-laden graffiti, buckets of Gorn, nudity, and outright pornography, and (just to offend anybody who wasn't offended yet) swastikas, racial slurs, and pro-KKK propaganda. Other ROM hacks are made with the intention of increasing the game's difficulty, and depending on the creator's ideas of how to accomplish that, it can result in the mod being Nintendo Hard and/or laden with Fake Difficulty, which may make them appealing to expert players but probably not to a mass audience. Most modding communities have very little moderation or quality control, save for a few that went on Quality by Popular Vote. In addition, redundancy is a bit of a problem as well — a lot of mods might accomplish similar things.

As mentioned earlier, computer games are much easier to modify than console games. As such, PC gamers will often list mods as a reason why PC games are clearly superior to their console counterparts, despite the aforementioned Sturgeon's Law.

Some of these even have their own work pages on this Wiki; see Game Mod Index.

Here are examples of the popular modded games among the modding community. Feel free to add in a game and some description if its community endorses it enough: