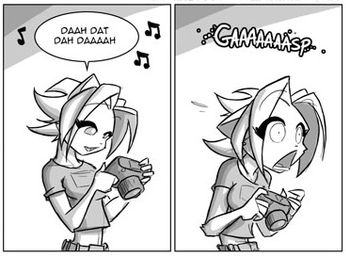 Nothing says "Drama!" like gasping it, often preceded by a nicely dramatic Double Take. Originally came from Theater, since people far away had to see how terrified the actors were. Then used in silent films for similar reasons. There was an interview once with an old actress, who says that they gave her lessons on how to scream, and that they were taught to deliberately over-act, and always raise their hands up in half made fists to cover their mouth.

A Sub-Trope of Melodrama and The Take.