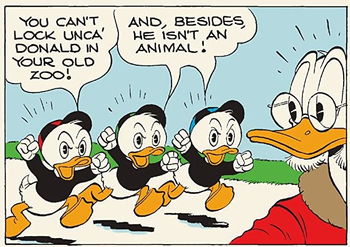 Best not to ponder on it for too long.
"That's human nature for you. Even if you're a penguin."
— The Narrator, The Three Caballeros
Advertisement:

Ever hear a Funny Animal say, "I'm only human"?

Weird, ain't it? This may indicate that a Funny Animal is unaware that he isn't human (yes, web pages aren't any more human than Funny Animals, but you know what I mean). This may also apply to actions, such as a dog eating ice cream or chocolate without getting sick, or a weasel having a romantic relationship with a human with no comment whatsoever. Most likely, it implies that the creator views the character's appearance as simply cosmetic; as far as the setting is concerned, they're just as human as you, no matter what they might look like. Ever wonder why Mickey Mouse was never shown with cheese in the theatrical cartoons? Walt Disney himself forbade it!

"Cheese makes Mickey seem like a mouse. He's really not a mouse, you know, he's really more a human."
Advertisement:

Sometimes, of course, this simply happens because Most Writers Are Human. Can be combined with Furry Reminder for comedic effect. Related to Furry Confusion and Anthropomorphic Shift. Not to be confused with denying you are part of the Furry Fandom. If a non-human is knowingly and ironically referring to himself as human, it's In the Original Klingon. Usually subverted if the character is a Beast Man; they'll insist that they are not a weasel since they, well, aren't a weasel. Can be justified if the character is a Baleful Polymorph who Was Once a Man- referring to themselves as "human" and doing other human activities may be just force of habit.

Sub-Trope of I Would Say If I Could Say and Orphaned Etymology. Contrast Furry Reminder. Compare and Contrast Furry Lens, when the character actually is human but just looks like an animal to the audience.