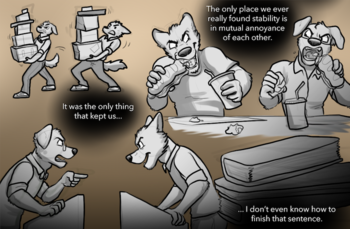 "The saga of your idiotic rivalry continues..."
"The Scarlets aren't our enemies, you understand. More like rivals. Friendly rivals."
— Ludlow, Green

Not all rivalries are bitter. Some are competitive, with both parties being driven by a healthy desire to one-up each other and, regardless of the outcome, they'll continue to push themselves in anticipation of their next eventual showdown. As such, they develop a mutual respect for each other's talents, even in defeat. If taken to extremes, their rivalry can border on exclusivity.

It's a staple of Fighting Games and martial arts media, usually involving the protagonist. Their rival can be anyone from the deuteragonist, or their Best Friend, or even a former enemy. Woe be to any enemy who stands against either of them, because then the unfortunate advisary will have both friends to deal with and much ass will be kicked that day.

Other rivalries may revolve around sports, performance arts, business, or... anything, really. Some can even be portrayed comically, with both parties competing over something mundane, or pointless.

Compare and often overlaps with Worthy Opponent and Spirited Competitor. Related to The Only One Allowed to Defeat You. Contrasts with The Rival, who serves more as a foil and is usually antagonistic. Can overlap with Vitriolic Best Buds if there is some teasing involved in the rivalry, or Bully Turned Buddy, if one of the rivals was an outright bully before turning friendlier.

Fan Works
Films — Animation
Films — Live-Action
Literature
Live-Action TV
Music
Radio
The Brewing Network: The Sour Hour has one with The Session, though it's pretty much one way. Jay encourages people to leave iTunes reviews that say his show is better than The Session, and he reads reviews he likes on air. On The Session they're barely aware of this.
Sports
Video Games
Web Comics
Web Original
Web Video
Western Animation
Real Life