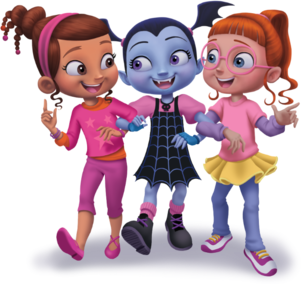 Don't worry, she doesn't bite.
Rory: My parents won't let me download at home. They think the Internet is a bad influence.
Benny: You're already a soulless, undead creature of the night. How much worse can you get?
Rory: DUDE! If my mom knew I was a vampire, I'd be grounded for, like, a month!
— My Babysitter's a Vampire, "Die Pod"
Advertisement:

Shows in which at least one vampire character (or any representative of an assumed-monstrous breed) is shown to truly, really be a good person at heart. Really.

Traditionally, vampires had to kill others to maintain their own extended lifespan, a supernatural Conservation of Energy law. Even victims who survived were permanently harmed. Some vampires might be charismatic monsters now, but they were Always Chaotic Evil, and likely to be Sealed Evil in a Can. They weren't even human in the original folklore and mythology, being either demons or demons possessing human corpses.

Authors moved on to exploring the effects this need to kill had on the vampires themselves and their relationship with humanity, as in the books by Anne Rice, the movies The Hunger and Near Dark, and the Tabletop Game Vampire: The Masquerade. Sometimes one of these vampires would be a Tragic Hero or Reluctant Monster.

Next, another wave of authors, such as Kathryn Rusch and Laurell K. Hamilton, choose to portray vampires (or "undead Americans", or "violator of personal neck-spaces") as a persecuted Token Minority, unusual cultural group, or just Star-Crossed Lovers. Since readers were unlikely to have much sympathy for beings who committed murder on a weekly basis, the necessity of killing had to go, as well as the constant urge to chow down on co-stars. In some fiction, vampirism is nothing more than a lifestyle choice; since these vampires get extended life, superhuman strength, and still have great sex from just a few drops of blood each night, it's difficult to understand why anyone stays human.

Television and film have lagged behind books a bit, with nice vampires exceptional rather than common. The vampires in the Blade Trilogy would seem capable of living just on stored blood, but since they seem to be Straw Nihilists, they enjoy killing humans as a demonstration of superiority.

Apparently heroic vampires find their way into detective positions with statistically intriguing frequency. There might be something to this, in that they're already part of the Masquerade, and therefore better equipped to handle supernatural villains than the average detective. See Vampire Detective Series for a complete list of examples of this genre.

Compare to My Species Doth Protest Too Much. FNVs who actively fight for good are Monster Adventurers. See also Predator Turned Protector (where they choose to protect humans against other vampires), Vegetarian Vampire, Religious Vampire (if they are pious and good), Reluctant Monster, Monster Roommate, Monsters Anonymous, Vampire Refugee, Voluntary Vampire Victim, and Romantic Vampire Boy. These vampires are often on the friendliest end of the Sliding Scale of Vampire Friendliness.

Finally, yes, the trope name is based on "Your friendly neighborhood Spider-Man!"