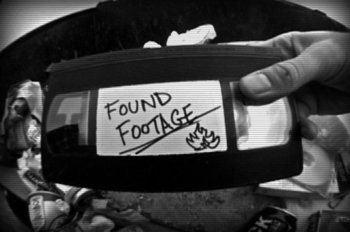 Well, at least they were nice enough to label it, as well as what to do with the tape.
Advertisement:

Movies that are shot to resemble actual camera footage recovered from an event. They typically contain a fair bit of Stylistic Suck, owing to the conceit that they are being filmed by people who aren't professional filmmakers.

A large number of films using this approach tend to be horror movies; the approach lends itself nicely to low-budget film-making and it positions the audience right in the center of creepy and terrifying events. The concept became a sensation after The Blair Witch Project, though it goes back to Cannibal Holocaust in The '70s, at least as a technique of film. In other mediums it goes back at least to the early 20th century. The majority of H. P. Lovecraft's works were presented as found manuscripts, reports, or other such things made to look like an actual first-hand account with the untold horrors. Dracula was written in this style, the story being told through a number of diaries and newspaper articles giving the appearance that Bram Stoker had collected them to document the story.

The subgenre saw a resurgence in popularity starting at the end of the Turn of the Millennium within the horror genre thanks to the success of Paranormal Activity, along with the decreasing cost and increasing availability of digital cameras. Other recent, non-horror films utilizing the format include Chronicle, Project X and Best Night Ever, as well as the TV series The River.

Compare Mockumentary, Based on a True Story, Vlog Series. See also Apocalyptic Log, which lends itself nicely to this style of filmmaking. Analog Horror also falls in a similar vein. The text equivalent is Scrapbook Story. The term "found footage" can also refer to footage that is re-appropriated (that is to say, treated as a found object

), and consequently "found footage film" can also refer to a Video Collage.