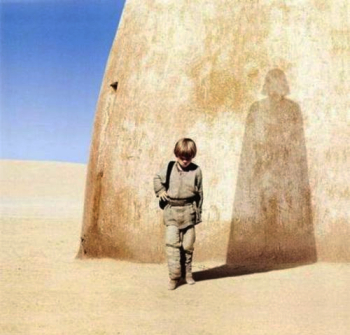 "Foreshadowing... Literally!"
Snape: Now before we begin, I'm going to give you all your very, very first pop-quiz. Can anyone tell me what a portkey is? Yes, Ms. Granger.
Hermione: A portkey is an enchanted object that when touched will transport the one or ones who touch it to anywhere on the globe, decided upon by the enchanter.
Snape: Very good! Now can anyone tell me what foreshadowing is? Yes, Ms. Granger.
Hermione: Foreshadowing is a dramatic device in which an important plot point is mentioned earlier in the story, to return later in a more significant way.
— A Very Potter Musical

A clue or allusion embedded in the narrative that predicts some later event or revelation. It could be a wayward comment or action, an event that doesn't make sense until later, a Meaningful Name, a rare blood type... so many things can warn us of the future. The foreshadowing may be ominous, or mildly suggestive, or it could merely be obvious in hindsight.

Good foreshadowing doesn't spoil the surprise, yet seems an obvious clue in retrospect. Bad foreshadowing either deflates the suspense or is too obfuscated (such as an Ice-Cream Koan) to predict anything, and capable of being overused. Foreshadowing may establish something to avoid an Ass Pull. Or it may put a viewer off as introducing a needless supernatural element to the story.

In literature, foreshadowing is commonly done when a possibility is mentioned, but almost immediately dismissed or disproved. Some readers will dismiss the suggested possibility just as the unsuspecting characters do. More experienced readers will immediately call the author's bluff and know what to expect.

Dreaming of Things to Come often foreshadows. Chekhov's Gun is often used as a foreshadowing tool. If it makes no sense, it may be Strange Minds Think Alike. If this is done in a Prequel (such as in the page image), it's a Call-Forward.

Two specific variants are Futureshadowing, where the shadowing comes after the actual event chronologically but is still seen before it, and Foreseeing My Death, where a character has foreseen, prophesied or predicted his/her own demise.

When there's only a tiny gap between the foreshadowing and the actual foreshadowed event, that's Five-Second Foreshadowing.

Contrast Plot Point. Compare AND contrast "Funny Aneurysm" Moment (where what was meant as a joke now comes off as an unfortunate foreseeing of a real-life tragedy) and Hilarious in Hindsight (where something becomes funnier or more relevant due to appearing to be prescient to more recent events). Contrast Fauxshadow and Tempting Fate. Production Foreshadowing is this trope's meta version. This Index Will Be Important Later covers foreshadowing tropes. This trope is a good Rewatch Bonus.

Please do not misuse this trope to refer to a series installment having something that appears to reference franchise installments that couldn't have been planned until years after the fact. The more recent event is more likely to be an Internal Homage.

Not to Be Confused with The Shadow Knows, which the picture to the right uses to do this trope.

Naturally, the examples are full of spoilers. Consider yourself warned.

Rachel's theory about her splinter predicts how the aliens will be defeated by Earth's own organisms.

Rachel's theory about her splinter predicts how the aliens will be defeated by Earth's own organisms.