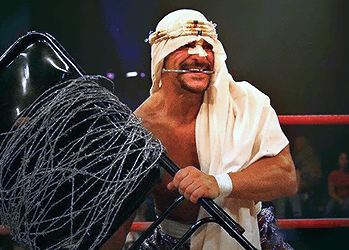 Introducing first, from Bombay India...
"I'm not from here! I have my own customs! Look at my craaaaaazy passport!"
— The Foreigner, Futurama, "Raging Bender"
Advertisement:

The Foreign Wrestling Heel, a.k.a. Evil Foreigner, is one of the major stock characters of Professional Wrestling. He's from another country, and loves his own country and hates America. Usually, the reason for this is because Americans (and American wrestling fans specifically) lack something that his country has in spades (or so he believes). For example, Brits and Frenchmen may look down on Americans because they lack class and sophistication; Japanese, because Americans lack honor; and Canadians, because Americans lack respect for wrestling tradition. These are the most common varieties of Foreign Wrestling Heel, but far from the only ones; one particular instance, Ludvig Borga, was an evil Finn who hated Americans because he felt Americans lacked respect for the environment.

A Foreign Wrestling Heel will often feud with an All-American Face; the typical climactic match to this feud is a Flag Match, where the flags of the two nations of the participants are placed upon opposite turnbuckles, and the winner is the first man to recover his own flag and wave it. Clashes with the Foreign Wrestling Heel generally cause International Showdowns by Proxy like this, as he is usually the villain in those situations.

If the Foreign Wrestling Heel doesn't speak English — or, in cases like Wild Samoans, at all — they will have a Heel manager to speak for them and draw additional heat for them.

During the Cold War, many (perhaps most) Foreign Wrestling Heels were Soviets, and spoke proudly of Communism and Glorious Mother Russia. It was difficult to find a wrestling promotion that didn't have an Evil Russian or three kicking around. Perhaps the best known of these was Nikita Koloff, and he also became the biggest subversion of the trope; when his arch-nemesis, MagnumTA, suffered a career-ending injury in a car accident, Nikita decided Magnum was a Worthy Opponent, gained a new found respect for him, and all Americans by extension, and dedicated the remainder of his wrestling career to his fallen foe; he thus became the first Russian face and did so without renouncing Communism or the Soviet Union.

Note that it is possible to be foreign and not a Foreign Wrestling Heel; however, the instant one shows any pride in being from a country that is not the US, he starts down the path to becoming one. Canada's Bret Hart, for example, wrestled most of his career as a face with his Canadian-ness being treated as an afterthought (unlike, say, the obviously Canadian heel The Mountie), until his 1997 heel turn, when he became proudly Canadian and launched a feud with all American fans and wrestlers. This led to him being a hated heel in in the States, but unsurprisingly led to his becoming loved even more by Canadian fans. Also, it's not necessary for the Foreign Wrestling Heel to be an actual foreigner. Simply looking foreign or having foreign ancestry is often enough for a wrestler to be given a Foreign Wrestling Heel gimmick (don't think too hard about this when it comes to American wrestling).

Lest the gentle reader think this is solely a gimmick for culturally insensitive Americans, consider the team of Art Barr, Eddie Guerrero, and Louie "Madonna's Boyfriend" Spiccoli, who wrestled as Los Gringos Locos in Mexican federation AAA, and were Evil American Foreigners. Likewise, many Japanese promotions have had their fair share of evil foreigners: All Japan Women's Pro-Wrestling using them extensively for the first ten years of its existence, especially women from the USA based WWWA and AGWA, and New Japan Pro-Wrestling used this as the defining concept that began the launch

This trope can also be played with if the wrestling company does shows in multiple countries. During shows in those other countries, the All-American Face becomes the heel, while the wrestler Americans vilify as a foreign heel becomes a beloved face, only to switch back when the company does a show in the U.S.

If a Foreign Wrestling Heel is particularly hated by the crowd, listen for them to chant of "USA! USA! USA!", even if his opponents that evening aren't Americans. If a Foreign Wrestling Heel's one and only heelish trait is his foreignness and non-American patriotism, he may end up popular in the nation he supposedly hails from, and even get temporarily treated as a face if his promotion does a show in his alleged home country.