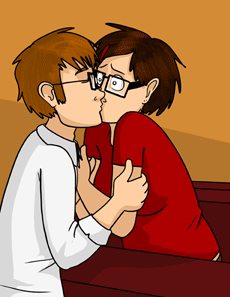 "Before she realized his intent, Dally caught her by the arms. His kiss was so sudden and fierce that for a second she thought her front teeth would be knocked down her throat. Then he was gone. She stared after him, incredulous, then pushed the incident to the back of her mind."
— Chronicles of the Kencyrath
Advertisement:

You are getting increasingly frustrated. Your Love Interest is ignoring your affections for them, even though you're making it oh so blatantly obvious. And you love them so much, so much that you can't stand it, that you wish they would stop ignoring you, and stop being so oblivious to your love for them. What do you gotta do?

Why, grab them, pull them close to you and plant a big wet one right on those lips that you've been dying to kiss for so long! And of course, you may not think about what possible consequences that your actions could bring you, since you are just too damn excited at being able to be so close to your love.

Engaging in this trope means that you may be a bit overly confident in your attempts to "woo" someone, you may have no idea how to actually do the whole romance thing, or you just couldn't help yourself, and you simply had to get your feelings across somehow.

Sometimes overlaps with "Shut Up" Kiss, Motivational Kiss and Tsundere. It may also happen to a person who is the victim in a I Have You Now, My Pretty moment. May or may not hint at an Attempted Rape, as a non-consensual kiss in Real Life can be charged as sexual harassment or even assault. See also "Take That!" Kiss.