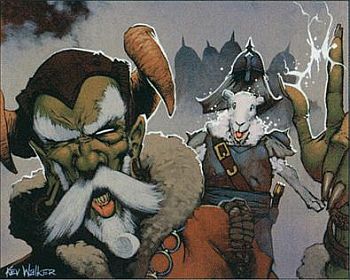 "Polywhat? It's a Frog spell, boy. The fact that you're a frog now should tip you off."
— Matoya, 8-Bit Theater
Advertisement:

Characters get hit with a spell, Curse, or Transformation Ray, causing an instantaneous and involuntary transformation until they can revert to their usual form by some means. These transformations are often harmful, but beneficial or neutral transformations can also occur. This is commonly some sort of animal creature (whether real or fantastic), though it can also be a plant or a lifeless object. They may or may not lose their voice, or even their mental faculties (in which case someone else will have to seek the cure for them).

In role-playing or video games, harmful transformations are frequently a Status Effect that will disable or greatly weaken most attacks and magic, but will rarely affect the victim's Hit Points or armor. People may get turned into toads, but — hot damn — those toads will be Made of Iron! A notable exception is when insects are involved, in which case the victim is not long for this world.

If the transformation is harmful, it could be a way for a spellcaster to defeat foes with magic without simply killing them, or as a form of punishment (e.g. underlings who failed their boss one time too many). It's also generally less permanent and more palatable than actual death. Often requires a hero to find the magic "cure" to turn his friend back into a person. This can be also be used to show a specific aspect of the character's personality, such as gluttons turned into pigs, or cowards into chickens. Occasionally, this may function as a Transferred Transformation; in such cases, one character stuck in an undesirable form can only break the curse by shunting it onto someone else.

Occasionally, a character may manage to save the day while still under this effect, sometimes through use of the animal form's abilities. This will lead to the Aesop that it's brains, not strength, that's important. Or that courage is more important than size. Or that you can lay an egg and still feel like a man.

Whether or not an involuntary transformation is effective against a Voluntary Shapeshifter varies, depending on whether or not it also imposes a Shapeshifter Mode Lock — otherwise the shapeshifter can just transform themselves back to normal, or at least something else.

Hilda turns into a troll.

Hilda turns into a troll.