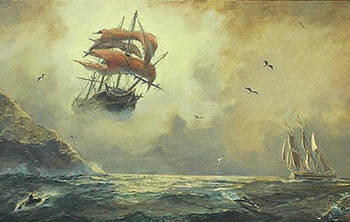 The Flying Dutchman is Barred from the Afterlife and cursed to go Walking the Earth (or sailing or flying or...) forever. Most versions of this fall into one of two types: the Flying Dutchman, cursed to sail the seas, and the Wandering Jew, forced to wander the earth.

The Wandering Jew story can be traced to medieval Christianity — in particular, a reference to Matthew 16:28,

wherein Jesus states that some of the people listening to him speak would not die prior to Jesus "coming in his kingdom", which some believe to be a reference to the Second Coming. Since many ordinary lifespans had passed between Jesus' speech and the time of its progenitors, the myth arose that at least one of those ancient audience members had been for some reason sentenced to immortality.

The Flying Dutchman variant (sources differ on whether Flying Dutchman was the name of the ship or a nickname for her captain) first popped up in the seventeenth century, and was said to be an old sailing superstition.

A political variant has the victims unable to ever stop wandering due to lack of a passport, being an exile, or other bureaucratic bungle that leaves them without the paperwork to settle. The counterpart to the political variant sees the character, instead of wandering, stuck in an airport or otherwise transitional area, which moves it far from the original trope.

When people wander by choice, this becomes Walking the Earth. When a ship is being followed, it's a Stern Chase instead; a vehicle of any kind that takes dead souls to another world is an Afterlife Express. There may also be some overlap with Noble Fugitive. The cursed character can sometimes be co-opted as The Drifter, or if they're specifically out to do good, a Knight Errant. And if it's nobody's fault, they may just have No Sense of Direction. It's a possible destiny of those who are Barred from the Afterlife.

Not to be confused with Wandering Dutchmen such as the traveling theologian and humanist Desiderius Erasmus.

Men Without a Country