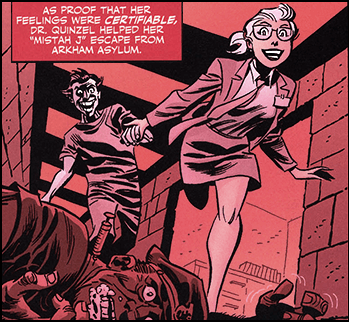 The end result of Dr. Harleen Quinzel's infatuation with her patient.
"That's the Florence Nightingale Effect. It happens in hospitals when nurses fall in love with their patients. Go to it, kid!"
— Doc Brown, Back to the Future
Advertisement:

Maybe it's that they're so cute when they're helpless. Maybe it's that we really want to feel loved and protected when we're vulnerable. First aid is intimate. You have to lean in to pat a cut eyebrow with Dettol-soaked cotton wool gently. Narrowly escaping a life-threatening situation gives the scene extra zing.

Whatever the case, patients can and do fall in love with those who give them medical care, and vice versa.

When the caregiver is a professional, such as a nurse or doctor, it would be considered extremely unprofessional for a doctor or nurse to act on those feelings. Doctors are advised against getting infatuated with their patients or to clearly rebuff the patients' advances, and having sex (or any sort of overt romantic liaison for that matter) with a current patient, or any of their family members, is considered a punishable breach of medical ethics (there is a line in the Hippocratic Oath specifically forbidding that) to prevent the doctor from abusing his or her position of authority to coerce sex from patients. But in fiction, this will usually be portrayed as sweet and romantic.

When the care is given by an amateur, there is an added element of romance because the medical treatment is entirely voluntary. This isn't their job, it's a genuine expression of caring for the well-being of another person. Typically, the "civilian" version comes in two flavors:

The After-Action Patch-Up often has touches of this, but since it's only one scene does not often have the full-blown effect.

Named for the famous nurse Florence Nightingale, although she herself never fell victim to this and if anything, would have been shocked by such an abuse of patient rights. Psychologists just couldn't think of a better doctor or nurse, thus proving once and for all that tropers aren't the only ones who choose Trope Namers that aren't examples of the trope.

See Unequal Pairing if a professional has a relationship with their patient.

See also The Woobie, which is what the patient may be to the audience and to the nurse. Also compare Weakness Turns Her On. If the character giving the first aid is not actually good at it, it's Nurse with Good Intentions. Possibly contrast Stockholm Syndrome and Lima Syndrome (though it might overlap if the captor tends to the captive's wounds).