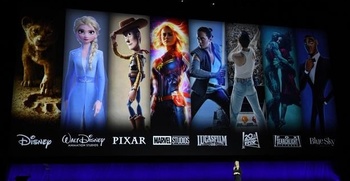 Some creators and studios work on a large number of unrelated projects throughout their history, while others instead focus on a particular series/franchise, possibly with a few side projects here and there. A flagship franchise is what happens when a creator consistently pools all of their creative efforts into releasing multiple major installments of a single series over many years, becoming intrinsically associated with it in the process. That is not to say that flagship franchises cannot change, if the creator finishes the original story arc and moves on to a new project that is just as big but completely unrelated to the first one.

Compare/contrast Magnum Opus, which is about a particular work (or series) that is considered a creator's greatest by the audience and critics, while not necessarily being the creator's central focus; and Adored by the Network, where the network or publisher makes the creative team work on a particular franchise at the expense of other projects.