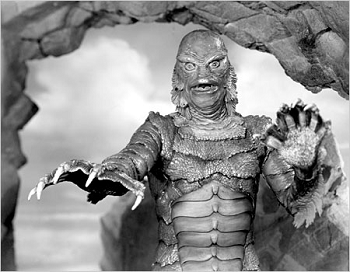 "Wandering free... wish I could be... part of your world!"
"They were mostly shiny and slippery, but the ridges of their backs were scaly. Their forms vaguely suggested the anthropoid, while their heads were the heads of fish, with prodigious bulging eyes that never closed. At the sides of their necks were palpitating gills, and their long paws were webbed."
— The Shadow Over Innsmouth
Advertisement:

Fish People are a specific category of (usually) intelligent, underwater fantasy species. While they're humanoids (one head, two arms, two legs), they don't look human at all; their bodies, especially the faces, have a fish-like/reptilian appearance. This means that mermaids are not true Fish People, at least not the kind described here. Neither are more human-like sea dwellers such as Aquaman or Namor the Sub-Mariner. A Fish Person's Character Alignment and ability to survive on land vary depending on the character and the work.

While Fish People are most often a pre-existing race, sometimes they are former humans (or fish) who are the result of mutation. This origin seems especially prevalent in Western Animation.

Merfolk can have a similar style, but they usually fail the critical "has legs" check — although the key word here is usually, since Our Mermaids Are Different. Since many Fish People appear somewhat reptilian, Lizard Folk and Reptiles Are Abhorrent are also related tropes. Expect them to create breathtaking Underwater Cities. The more civilized variants may have Clothing Appendages formed from fins if they don't have actual clothes.

Like merfolk, they will frequently develop a romantic and/or sexual attraction to humans, though their more animalistic appearance tends put such attraction more in the Mars Needs Women category than Inter Species Romance, and will usually be played as more the monstrous lust of an Abhorrent Admirer than as true love. Exceptions do occur, however.

Fish people are a subspecies of Beast Man, Super-Trope to Shark Man, and cousins to both Frog Men and the above-mentioned Our Mermaids Are Different.

The last friend Arlo makes before reaching New York is a cynical reverse mermaid creature who has a hatred of children.

The last friend Arlo makes before reaching New York is a cynical reverse mermaid creature who has a hatred of children.