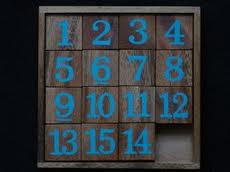 The "fifteen puzzle" or "slide puzzle" is a sort of Stock Puzzle where one has to arrange a set of scrambled numbers so that they are all shown in ascending order. One spot is always open, allowing pieces to be moved around, but it is designed in such a way that no piece can ever be removed from the board. There are larger versions with more than than fifteen squares; these are called "n-puzzles", where n is the number of scrambled numbers (always a square number minus one).

A more general version of the "sliding puzzle" will have the player try to put together an image in the same manner as above. The picture you're trying to reassemble is usually printed on the back of the box to minimize frustration.

The puzzle traces back at least to Noyes Palmer Chapman in 1874; later on, Sam Loyd claimed to have invented it. Loyd did at least popularise the puzzle, by offering a huge prize each week in a newspaper advertisement for those who solved a certain configuration. He had analysed the puzzle and proved that half of all configurations are impossible to solve, naturally including the one in question, and thus nobody ever won the huge prize he offered.