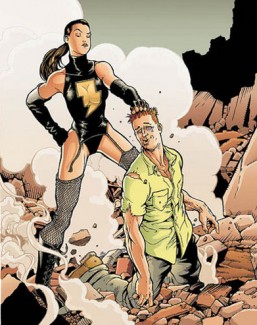 Surely, he's happy to be at her feet. And if not, the audience won't care.
Advertisement:

This person is a rapist, torturer, and/or Domestic Abuser who treats their significant other like a slave. Surely, such a character must be a horrible villain who suffers a humiliating defeat by the end of the story?

Unless they are the Fetishized Abuser. Then their abusiveness makes them sexy, and relies on Rule of Sexy.

Fetishized Abusers can be readily distinguished from being a Jerkass because their abuse is eroticized, and their beloved's conflict and unhappiness will be played for titillation. As such, they are all-but-guaranteed to be Mr. Fanservice or Ms. Fanservice, and the consequences of their behavior are almost never handled realistically. The Fetishized Abuser almost always gets together with whoever they're abusing, even in cases where they don't seem particularly compatible, although a few are doomed to merely be the rival.

In any variation, if they get called out on their actions, don't be surprised if they pull a Wounded Gazelle Gambit to get "rescued" from their victim.

One type of Romanticized Abuse, and thus a subtrope of Fanservice: Sexual abuse not designed to be sexy and appealing is not this trope.

open/close all folders
Anime and Manga
Audio Play
Comic Books
Fan Works
Film
When the Jerkass realizes his friend may well be on his way to date her, it's played for laughs that he doesn't warn him. Luckily, the friend is Too Kinky to Torture so it all works out.
Literature
Live-Action TV
Music
Music Videos
Tabletop Games
Video Games
Visual Novels
Webcomics
Web Original
Western Animation