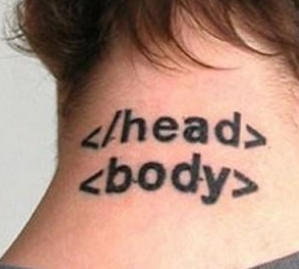 <caption>In this case, "HTML" stands for "Head To My Legs".</caption>
OP: Has anyone noticed that Twitter-style hashtags have replaced HTML-style coding as meta-commentary on the Internet?
Person responding: </era>
— Failbooking

<article>note Which is now real HTML as of HTML5.

On blogs and Internet discussion forums, when participants use the SGML-style tags popularized by HTML (or sometimes BB Code-style tags) to accentuate their messages.

Sometimes these tags can include attributes such as <flame tone="angry">...</flame>.

Oftentimes the opening tag will be omitted and only the closing tag will be there, as a kind of self-conscious lampshade hung on the preceding flame/rant/etc. It is also used to show that a sarcastic rant mocking the opposite side of some debate is just that. Everyone KNOWS that first person is good wiki syntax, after all. </thattroper>

Can also be used in image macros. Note that not all edited photos are image macros: Some humorous pictures are seen on the 'Net, such as a man with "</head> <body>" tatooed on his neck or a tombstone with "</life>".

Anti-war candidate Darcy Burner wore a T-shirt with </WAR> on it in several photos.

This used to be done with faux C preprocessor directives, e.g.:

Or, on occasion, by (t)csh environment variables:

but that usage has largely been supplanted by more-approachable HTML.

The successor phenomena is #HashtagForLaughs