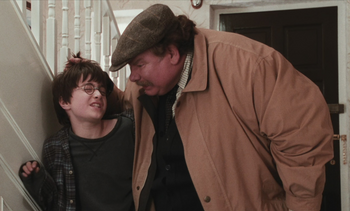 Not lean, but still mean.
"Your sins are exceeded only by your girth!"
— Green Goblin on Wilson Fisk, Spider-Man: The Animated Series.
Advertisement:

Also called fatbastarditis. Once a television character reaches a certain level of tubbiness, the show they are in will lose sympathy for them. It is generally assumed that overweight people are either pathetic, obnoxious losers or greedy hedonistic Corrupt Corporate Executives. They also tend to be portrayed as ludicrously obsessive eaters. Furthermore, most are portrayed as lazy, having poor hygiene, bad grooming, and no fashion sense. Glandular conditions, genetic tendencies, a natural endomorph body type, low metabolism, and weight gain as a side effect of prescription drugs are treated as lame excuses alongside the "I'm just big-boned" mold.

This trope is Older Than Steam (when resources are short and the peasants are starving, the rich fat guy who owns their farms will attract considerable resentment), but with the introduction of synthetic, high-fat foods in the early twentieth century, which enabled people from most social classes to gain weight quickly, the kind of immorality it was used to signify changed considerably. Prior to that point, being fat was considered high fashion and a status symbol in an unequal world — examples include Adipose Rex and how having a fat wife proved that the Railroad Baron had enough money to feed her a lot. Nowadays, obesity is more associated with the poor, as processed food is far cheaper than healthier alternatives, and a lower-class Fat Bastard will usually be used to illustrate the physical, intellectual, and moral inferiority of the slobs in a Slobs Versus Snobs conflict that takes the latter's side.

Interestingly, some comedians (usually fat ones) complain about how modern society won't let them tell fat jokes anymore... although the sheer quantity of examples available tends to disagree on this point. Obesity is so universally seen as a negative character trait that it's relatively common for characters to be given some Adaptational Attractiveness to offset this fact.

Compare Big Eater and Villainous Glutton (often with Jabba Table Manners). Fat Bastard and Big Eater are usually (but not always) mutually exclusive. While Fat Bastard is often fairly ugly, the Big Eater usually has a somewhat pleasant appearance. This is because the former is played for villainy and the latter for laughs. Dead Weight is this type... but undead! When a Fat Bastard does their own fighting, they can be a simultaneously humorous and terrifying foe for a hero to face off against — these portrayals often invoke the character's obesity as a Disability Super Power or Power-Upgrading Deformation. Kevlard is a commonly invoked trope, particularly for a Stationary Boss or Mighty Glacier villain. Stout Strength is also a stock trait for these villains, and they will rarely be Acrofatic. When facing a villain with more than one of these traits, crying is an acceptable tactic.

This trope is named after the character from the Austin Powers movies. He epitomises this trope to such an extreme that it qualifies as parody.

God help you if such a character is Large and in Charge — they could very well be a Corrupt Corporate Executive or Morally Bankrupt Banker. Worse yet, they could be an Adipose Rex. (Bear in mind that the latter is not synonymous with this trope, though.)

Fat Idiot and Fat Slob portray similarly negative images of the overweight, though not necessarily unsympathetic ones (there are plenty of dim but good-hearted fat characters) and it's entirely possible to be a Fat Bastard without being either of those other two. Contrast Big Beautiful Man and Big Beautiful Woman (men and women who are attractive because they're chubby), Big Fun (fatness = jolly and great fun to be around) and Lean and Mean (a skinny bastard). Often stems from Evil Is Bigger and Beauty Equals Goodness.

Truth in Television to a degree — obesity affects the limbic system, a group of interconnected structures within the brain that regulates emotions. However, the mood most closely linked to obesity is depression, of which irritability can be a symptom, but is more commonly hopelessness, apathy and loss of confidence.

Infamous Chinese warlord Dong Zhou is incredibly fat as well as an incredible jerk. It costs him his life in the end.

Infamous Chinese warlord Dong Zhou is incredibly fat as well as an incredible jerk. It costs him his life in the end.