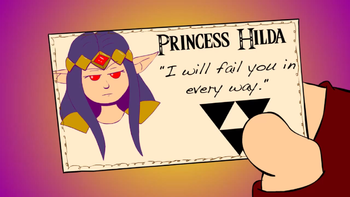 It's not the most glorious of titles, but it does make for an interesting business card.
"You know me. I always save the day."
— Sarcastic Hawke, Dragon Age II
Advertisement:

Heroes sometimes lose. It's the general rule of fiction to the point of being a near Omnipresent Trope, with a few exceptions. A loss provides the hero a chance to learn valuable lessons like humility and resilience, an opportunity for Character Development, and keeps the villains fresh and threatening. After all, losing in Acts 1 and 2 doesn't mean a hero won't beat the villain in Act 3.

And then there are these heroes. These heroes never win.

A Failure Hero might make some headway against a rival or villain in the first or second round, but the rival or villain neatly trounces them before the end credits, sometimes thanks to a Diabolus ex Machina. (The latter is especially common in potentially series-resolving situations.) Any "wins" he does pull off are ambiguous and open-ended, further the villain's plan, or blatantly make things that much worse for the unwitting hero. This, of course, tends to rob a given episode or movie franchise of dramatic punch when the viewer's reaction to a hero making steps to resolving their lifelong goal is "You're Just Yanking Our Chains!"

Behind this is usually the idea that the hero sucks that much. Plus he's the hero; the side of good is in an eternal struggle with evil! This is especially common in comedies where the hero is a failure of some kind or where advancing his goals would end the show.

The loser counterpart of Invincible Hero. Not as prevalent as its sibling, but still common enough to warrant its own trope. The Small Steps Hero will become this in a truly Crapsack World.

Please note that being saddled with the pesky Status Quo Is God or Failure Is the Only Option tropes isn't enough to qualify someone as a Failure Hero; they must fail at not only the thing the shows says they can't succeed at but at nearly everything else due to continual plot contrivances.

Compare Useless Protagonist, Heroic Wannabe, Super Loser, and Super Zeroes, the latter being the comedic version. Contrast Invincible Hero. Usually falls prey to What Measure Is a Non-Badass?, and may lead to the utterance of the Eight Deadly Words or Too Bleak, Stopped Caring. Also see Ineffectual Sympathetic Villain, the evil counterpart.